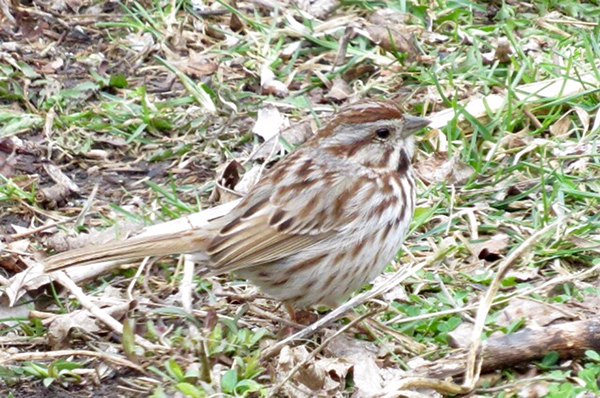 “Everything is nearly copacetic. I have plates of food in my refrigerator that are growing new food. I bought a box of animal crackers yesterday. I love thinning the herd, but I’m trying to eat healthier. I’m eating a lot more salads. I’m just glad that taco salad is considered a salad. It’s hard having an entry-level position in the food chain. I went into the Eat Around It Cafe and ordered the merchant’s special. I told the friendly waitress that I didn’t want the marshmallow salad that came with it. She told me I couldn’t have the merchant’s special then.”

“Because without the marshmallow salad, it’s not the merchant’s special. She is crazy. I know. I can spot my own kind a mile away.”

“Are you still the assistant manager at Fuel’s Paradise inconvenience store?” I ask.

“Don’t let my superior intellect frighten you. I’m the first assistant manager. That means I work, but my corn gets planted first. It’s a scary job. I look at photos on driver’s licenses.”

“What does the first assistant manager do?” I say.

“My job is to wake the manager whenever I see the owner coming.”

Just the other day

Well, the robins that migrated back here have had three snows on their tails, so it should be spring. It should be.

Spring makes it appear as if the road ditch is the natural habitat for garbage. The change of seasons turns holes into bumps and bumps into holes.

A woodpecker hammered on a tree declaring its territory. When it comes to headache inducers, nothing gets through its thick head.

I watched a female robin build a nest. She carried nesting material to the site, put it in place and wiggled it into shape.

The robins were vocal. Many birds are now. A brown thrasher performed an improvisational riff. A woman I met at Lost Island Nature Center near Ruthven, Iowa, told me that she loves hearing the different voices while she walks. She said that it would be a sad world if only one kind of bird sang.

The ups and downs of birding

I was riding the elevator in a tall hotel in Irving, Texas. The hotel was filled with various conventions and conferences or it might have been conferences and conventions. There was one other passenger as I entered the moving rectangle. He wore the uniform of a serious businessman. He wasn’t staring at the screen of a cellphone, but he held a phone in a hand at his side. I asked him, a stranger in a nice suit and tie, what his favorite bird was. He replied promptly, “The mockingbird.”

We had a lovely talk about birds as we traveled between the floors.

“Why does a loon chick ride on a parent’s back?” It might warm the youngster and it reduces predation.

“Why would a great horned owl eat only the head of a kill?” The brain contains considerable protein and is a desired dish because of that. The owl might have filled up on brains. If the prey item was too large to carry, the owl might have eaten the most nutritious part.

“What are the best things to feed songbirds?” Sunflower seeds, peanuts, suet, white millet, safflower seeds and nyjer are excellent choices. I’ve found that my yard birds can be fussy about safflower. Squirrels and grackles don’t seem to care for safflower. Avoid milo.

“How long does it take for an oriole to build a nest?” The female weaves the nest, anchoring it high in a tree. Construction materials can include grass, grapevine bark, wool, horsehair and artificial fibers. Females will recycle fibers from an old nest to build a new one. Males might bring nesting material, but don’t do any weaving. Building takes about a week, but bad weather could cause it to take two weeks.

Bob Janssen thinks that Minnesota state parks are for the birds. Bob is an author and avid birder who has written a book, “Birds of Minnesota State Parks,” that highlights state parks as places to observe birds. More than 400 different species have been seen in Minnesota and about 300 of the 315 regularly occurring bird species have been recorded in our state parks. Bob spent years surveying the birds in state parks. The book tells what birds are likely to be seen in each park and where to see them. The book includes park maps and photos. The book, for both beginners and experienced birders, will be available at state park nature stores. It can be ordered from Minnesota’s Bookstore by calling 800-657-3757. This book encourages interest and understanding of the avian lives of our state parks. If Bob wrote it, it’s good.

“Don’t be pushed by your problems. Be led by your dreams.” — Ralph Waldo Emerson

“When hungry, eat your rice; when tired, close your eyes. Fools may laugh at me, but wise men will know what I mean.” — Lin-Chi