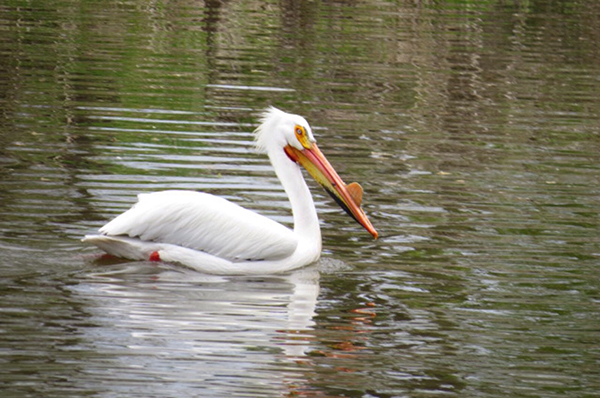 This pelican has a nuptial tubercle on bill. – Al Batt/Albert Lea tribune

“Everything is nearly copacetic, but I’m tired.”

“What have you been doing?” I say.

“I’ve been watching others work. Soon, I’ll be watching people graduate. It reminds me of my graduation. I’d started a petition to change the colors of the school to green and yellow so I could wear my John Deere cap to graduation. Lots of ditch cheese this year, those yellow flowers along roads. Are you through with today’s paper? I haven’t read it. Ma fixed me a meal. She’s a good cook with bad recipes. It was her almost edible hotdish. All the taste had been replaced with calories. Whenever she cooks for me, I have to hear her one and only joke. She says that when I was born, it added two feet to the house. She laughs as though she’d never heard it before. I asked Ma if she had seen today’s paper. I like to do some reading after eating. Ma told me that she’d wrapped the garbage in it. I protested that I hadn’t looked at it yet.”

“What did your mother say?” I ask.

“She said, ‘You didn’t miss much. Some egg shells, coffee grounds and an apple core.’”

I went for a walk. My mind needed airing.

The weather was what it wanted to be.

I live where climate change is evident. If I don’t like the weather here, I need wait only a day. It will change.

The birds arrived in black, blue, brown, gray, green, orange, red, white and yellow colors. A catbird mewed. My cat does a great impression of a catbird. I wondered where she’d learned that? Many of the vivid birds had migrated from other parts. There is magic to migration. It’s still magic even if you know how it’s done.

I watched six grackles chase a single crow out of sight. The grackles were demonstrating an apparent intent to harm. It was evident that the crow had crossed a boundary. Nesting territories are sacrosanct. Why the lengthy chase? The corvid obviously had refused to say, “Uncle.”

Squirrels scrambled here and there. Up trees. Down trees. Burying things in lawns. Digging things up from lawns. Acting squirrelly all the while.

Squirrels have a long list of things to do. Squirrels regularly visit my mother-in-law’s bird feeders. She isn’t bothered by their attacks on the birds’ food supply. On the contrary, she finds their visits hilarious. That is the best way to deal with squirrels.

The lilacs bloomed. The scent they produced enthralled me. I’m not the only one captivated by lilacs. Longfellow wrote, “I shall not be likely to go to town while the lilacs are in bloom.”

The smell of lilacs not only keeps one from straying to the bright lights of the big city, it brings back memories. Lilacs mark the territories of old homesteads and aged graveyards. They provide a floral arrangement to accompany the recollections of laughter long silent.

My thanks to all those who sent me clips of my appearance on the New Orleans TV station, FOX 8 News WVUE-TV. I was on a segment titled, “The Bald Eagle: A Louisiana Success Story.”

It is amazing to see bald eagles where they were not. Each eagle is a miracle, as is every other living thing. Except maybe chiggers. I’m proud to be a trustee of the American Bald Eagle Foundation and it was fun doing the TV gig.

“Is it Canada goose or Canadian goose?” The majority of folks who deal in such things from a professional angle use the attributive noun (Canada) instead of the adjective (Canadian) when referring to the goose. No one worth knowing will hate you no matter what name you give the goose. If you want to be sure you are correct, call it a Branta canadensis.

“There is a bird in my yard that sounds like a sewing machine. What is it?” It sounds like a real Singer. Singer. That’s a sewing machine. A bit of levity there. A small bit. Oh, never mind. I’d better quilt while I’m ahead. Quilt, that’s another sewing reference. I crack me up! Chipping sparrows are cute little birds that produce a loud, trilling song that many have described as the sound of an electric sewing machine. Others consider it as a sound reminiscent of an insect. The chipping sparrow is crisply plumaged with a bright rufous cap.

“What Minnesota state park is the most visited?” The state park that gets the most visitors is Fort Snelling, followed by Gooseberry Falls and then Itasca. The rest of the top ten in descending order are Tettegouche, Jay Cooke, Whitewater, Split Rock Lighthouse, Interstate, Temperance River and Flandrau. Itasca has the most overnight stays.

“I like to listen. I have learned a great deal from listening carefully. Most people never listen.” — Ernest Hemingway