Memorial services for Harriet A. Sola of Bellevue, Washington, will be at 11 a.m. Saturday at Bonnerup Funeral Service in Albert Lea. The Rev. Jon Holt of First Lutheran Church will officiate. Visitation will be from 4 to 7 p.m. Friday and one hour prior to the service on Saturday. Interment will be in Deer Creek Lutheran Cemetery. 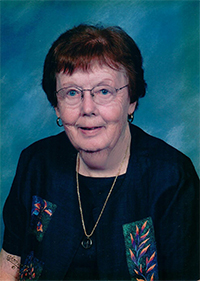 Harriet was born July 18, 1921, in Sand Creek, Wisconsin, the daughter of Henry and Amanda (Anderson) Hendrickson. She graduated from Chetek High School in Wisconsin and received her nurses training at Franklin Hospital School of Nursing. On Oct. 31, 1959, she was united in marriage to Iner Clinton Sola.

Harriet had been employed for 13 years as a nurse at St. Olaf Hospital in Austin and then at Naeve Hospital East Clinic in Albert Lea for 16 years. She was a member of First Lutheran Church in Albert Lea since 1959 where she taught Sunday school, served on the social ministry commission and was a quilter. She was also a member of the Eastern Star and Native American Rights fund. She loved spending time with her family.

Memorials should be directed to St. John’s Lutheran Community in Albert Lea. The family wants to give special thanks to the loving and supporting caregivers of the elderly. God’s peace to all.