Humidity and temperature play into when robins build their nests 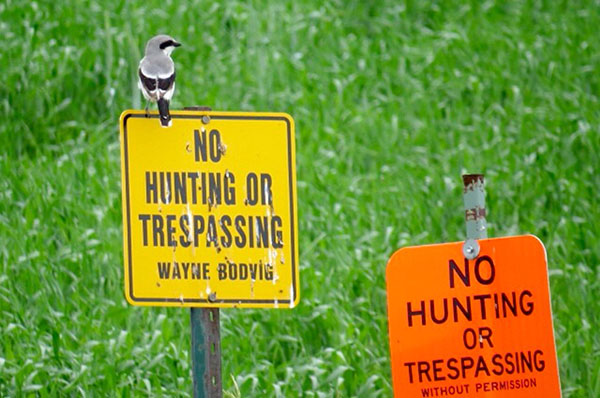 A loggerhead shrike is both hunting and trespassing. – Al Batt/Albert Lea Tribune

“Everything is nearly copacetic. Where have you been?”

“I’ve been birding in the Carrington, North Dakota, area,” I answer.

“I don’t like driving anywhere while being tailgated by cars that if they could get an inch closer, would be in front of me. Yet you drive all the way to North Dakota to bird peep. There are birds here. Why go anywhere else?”

“St. Augustine said, ‘The world is a book and those who do not travel read only one page.’ Potholes and prairies made for a perfect peregrination,” I add.

“Prairies? That’s where molehills are mountains. I know that you have to bird because you don’t golf. Birding allows you to wear mismatched clothing. What is Carrington known for?”

“Those were two of the birds I saw,” I state.

“Aren’t you worried that you’ll see every bird there is?”

“This comes from a man who wrote a poem about how much he hates poetry. You fish all the time. Aren’t you afraid that you will catch everything?”

A hush fell over the crowd.

The sweet songs of birds greeted me. The chatterbox of the group was a house wren.

I examined a large mound on a lawn. There wasn’t much ant activity. It must have been a retirement hill.

The anthill was surrounded by Dutch clover. It grows harmoniously with grass. It thrives in areas that are poorly drained or shady. The white clover, a legume, converts nitrogen into fertilizer. This drought-resistant plant stays green during the hottest and driest parts of summer. The small white flowers, often tinged in pink, are lovely and attract bees, butterflies and other beneficial insects.

A barn swallow zoomed over some Japanese tree lilacs, fragrant trees that produce large clusters of showy white flowers that last for several weeks in late May or early June. A native to Japan, the tree generally grows 15 to 30 feet tall.

Aristotle said, “One swallow does not a summer make.”

Someone else said, “When the swallows fly high, the weather will be dry.”

I saw many things. They were all worth seeing.

“Are golden eagles bigger than bald eagles?” They are about the same size.

“How do robins know when to nest?” In 1974, Frances James and Hank Shugart used climate and Cornell Lab of Ornithology data to develop a model showing that robins cue their nesting times on weather. Hatching is timed to occur when local humidity is 50 percent and temperatures are between 45 and 65 degrees Fahrenheit. That humidity brings earthworms to the surface. Robins spend five to seven days building a nest.

“When did house sparrows come to this country?” House sparrows (formerly English sparrows) were introduced to establish wildlife familiar to European immigrants and/or to control insect infestations. Nicholas Pike, Director of the Brooklyn Institute, purchased eight pairs of sparrows from Liverpool, England, and released them in Central Park in 1851. There were subsequent releases in other cities, including St. Paul in 1876. The sparrows found a welcoming buffet of horse exhaust, livestock feed, garbage, and fields of grain galore. Their numbers increased quickly and by 1887, some states offered bounties on the birds. Sparrows were introduced intentionally to other countries, others were likely stowaways on ships. I give props to any bird that survives our winters.

Everly Batt of New Ulm asked if male bees sting. No. A hive could have 50,000 bees, but there is only one queen and she lives as long as five years, laying as many as 1,500 eggs per day. When she dies or becomes unproductive, the other bees create a new queen by feeding royal jelly to larvae. Worker bees are females that live for four to six months during the winter, but only four to six weeks during the summer. They work themselves to death. The worker bee has a barbed stinger that results in her death after stinging. The male bee (drone) has no stinger.

“How much poop does a Canada goose produce?” If geese produced as much excreta as claimed, they’d have pooped themselves out of existence. The numbers are dependent upon food consumed. A study done by N. M. Scherer in 1995 found that the average goose produced 2.87 ounces of dry (not wet) droppings each day. The study found that droppings averaged about 2.25 percent of a bird’s weight. The average Canada goose weighs 11 to 12 pounds. A 1975 study conducted by Bruce Manny, research fishery biologist with the U.S. Geological Survey, found that the average goose produced 5.53 ounces of wet droppings or 1.15 ounces of dry droppings per day. Other research shows results somewhere in the ballpark of the Scherer study.

“A weed is a plant that has mastered every survival skill except for learning how to grow in rows. — Doug Larson