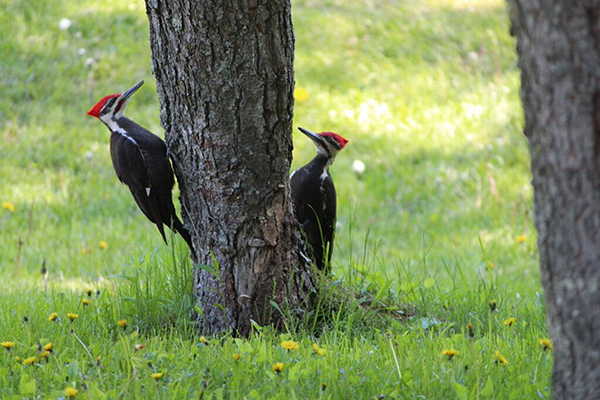 Kent Gernander of Rushford took this picture of two pileated woodpeckers. The male has a red mustache, however, the female’s is black. – Provided

“Everything is nearly copacetic. I thought I had a cold, but it turned out to be a bad case of the tonsils. So I went fishing in the company of mosquitoes large enough to go fishing by themselves at whatchamacallit lake. Why can’t I remember its name? I have trouble remembering three things — names, faces and I can’t remember the other thing. My peanut brittle field looks like it’s going to be a poor one. I probably planted it too deep. Soup night at the movies was a bad idea. With all that slurping in the theater, I couldn’t hear a thing, not even people eating popcorn. I heard on one of those goofy morning TV shows that some scientist calculated that the average man eats 12 times his own weight in an average year, while a horse eats only eight times its weight. So if I want to lose weight, I should eat like a horse. I think I’ll have a peanut butter sandwich. A peanut butter sandwich is better than a good steak.”

The morning chorus was at full throttle. A catbird sang an endless loop of what sounded improvised.

I looked at an oak tree that I’d planted. It had grown tall, evidence of time’s passage.

Young starlings, gray and noisy, made harsh demands for food. The raspy voices of the fledglings filled the yard as they shadowed their parents.

The varied charms of a yellow-billed cuckoo became evident in an open space amid the leaves.

It’s hard to argue with that.

Donald Stokes defined it as, “More wet, cheer up.”

My boyhood ears heard it as, “Cheer up, more rain, cheer up.”

“Why are grackles pooping on my sidewalk?” You’ve offended them. Not really. In the Rio Grande Valley of Texas, great-tailed grackles are so numerous that they darken the sky and whiten sidewalks. Their fly-by pooping is a result of a need to go. Everybody goes. At this time of the year, the common grackles aren’t bombarding your sidewalk with their own droppings. It’s routine nestkeeping. Baby grackles produce waste in mostly white, fecal sacks that the parents carry away from the nest, targeting a specific bombing site, which oddly enough is seldom a Target store. They sell diapers there. The next big thing will be grackle diapers. Grackles want to hide nest locations from predators. Dropping the fecal sacks into water disperses the fecal matter and reduces the smell. Sidewalks might resemble water, especially after a rain. Birdbaths, automobiles and my garage door also make attractive disposal spots. Cheer up, you could own a swimming pool.

“When are fawns born?” Most white-tailed deer are born in late May or early June. They usually weigh about 7 pounds. Twins are common. They lose their spots when 3 to 4 months old.

“What is making a clucking noise in my yard?” Do you raise chickens? If so, that’s your answer. If not, it could be a chipmunk, blue jay, crow or the diurnal clucker. No one has ever seen a diurnal clucker, which makes it a yeti.

“Will marigolds keep rabbits away from my garden?” No, but rabbits will keep marigolds away. Rabbits eat marigolds.

“Why are wood ticks in trees?” Wood ticks, also called dog ticks, aren’t found in trees. I get them in the grass on my way into and out of woods.

Rick Mammel of Albert Lea asked if robins reuse nests. Robins don’t reuse last year’s nests, but may build a nest on top of one in a prime location. Robins have strong instincts to build new nests each year. Some use the same nest a second time during a breeding season. If a brood was successfully raised, a robin might build a new floor for the nest and raise another family in it. It’s not uncommon for mourning doves to use old robin nests.

I had a squirrel-twirl feeder. It had three wooden arms connected to a center pivot. Each arm had a spike protruding from its end. An ear of corn was impaled on each. When mounted on tree or post, the feeder rotated when it felt the weight of a squirrel. The idea was that the acrobatic rodents could take only a couple of kernels at a time. That was the plan. The squirrels didn’t get the memo. One squirrel pulled an arm free, carried it to the top of a tall tree and wedged it into a crook. That’s where it remains.

“When you take a flower in your hand and really look at it, it’s your world for the moment.” — Georgia O’Keeffe