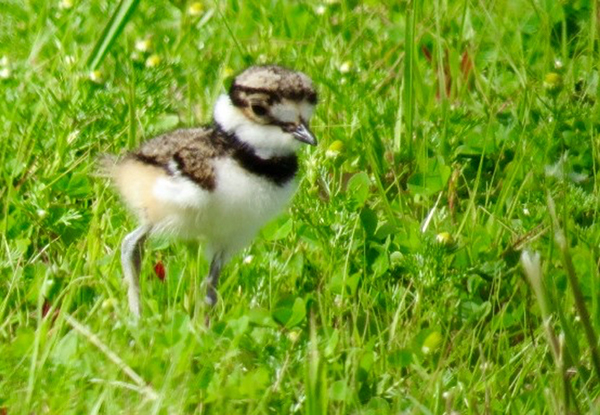 A young killdeer takes a stroll in the grass. – Al Batt/Albert Lea Tribune

“Everything is nearly copacetic. I bought a bag of potato chips. Do you know what the largest ingredient in a bag of chips is?”

“Air. My cousin Chumley had the rearview mirrors removed from his car. Now he never looks back. Maybe that’s the secret to success. Chumley always seems to have money. It grows on him like whiskers. I asked Chumley for a loan. He asked me what was in it for him.”

“Less money, of course, duh. One of the guys at work got fired. The boss caught him sleeping on the job. He didn’t wake him. He put a sticky note on him.”

“It read, ‘As long as you’re asleep, you have a job. But as soon as you wake up, you’re fired.’ It reminded me of the one time I fell asleep in church.”

“The one time?” I interject.

“Well, one of the times. I shook the pastor’s hand afterward as I left the church. I told him that it was his best sermon ever. I felt like a new man when I woke up.”

Bittersweet nightshade flowered in the brambles of what passes as our yard. The aggressive growth of this beautiful, nonnative plant bothered me, so I decided that I’d pull it. I did. When I yanked it out by the roots, I accidentally dumped three robins from a well-hidden nest. The nestlings would have likely left their home the next day, but I felt guilty subjecting them to an extra day of peril. I herded the three back into the brambles, raspberry canes mostly. Once young robins are big enough to leave a nest, there is no reason to put them back. They won’t stay.

The next day, I checked on them. I found two of the fledglings in trees and decided not to search for the third as the parents had become agitated in my presence.

I looked at the robins a little longer than I might have done normally because I’d just read about a study by Microsoft Corporation that claimed the average human attention span had dropped from 12 seconds in 2002 to only 8 seconds in 2013. That’s a second shorter than the attention span of a goldfish.

Scientists have discovered a new species of glass frog in Costa Rica that bears a striking resemblance to Kermit the Frog. On a day of mourning doves and all-day mosquitoes, I hoped that Kermit had an appetite for skeeters.

A robin flew by. I saw the white rear corners of its tail. They were well worth noticing.

Toni Perschbacher of Albert Lea asked how to discourage crows. Crows are intelligent birds. They do what comes naturally and that gets them into trouble at times. Owl replicas, recorded distress or alarm calls, pyrotechnics or starting a neighborhood petition asking the crows to move are all equally ineffective in causing crows to vacate. There is a hunting season on crows, even though none of us enjoys eating crow, in areas where allowed. It helps to keep crows out of food sources. Secure trash. Cover compost or omit food scraps. Feed pets indoors or remove food promptly after they’ve eaten outdoors. Use feeders that exclude large birds. If crows are problems in the garden, netting might help. Crows are so smart. I’ve never found a way to discourage their presence. I’m still trying to outsmart just one squirrel. If that should ever happen, I’ll move on to trying to outsmart a crow.

“How can I attract robins to my yard?” Provide water and plant berry-producing trees and shrubs.

“Do you have a good photography tip?” Make sure you remove the lens cap on your camera before taking a photo.

“What’s biting me on the ankle?” There are so many possibilities. It could be your husband. You know how he is. It could be the neighbor’s dachshund. It’s hated you since you ran your lawn mower over its favorite squeak toy. It could be stable flies. They resemble house flies, are about 1/4-inch long and are sometimes called “biting house flies.” They inflict a painful bite, feeding on the blood of warm-blooded animals including humans. Stable flies particularly attack the ankles and are on their worst behavior in early morning and late afternoon. They are strong fliers, capable of flying long distances for a blood meal. They lay their eggs in decaying organic matter such as animal bedding or grass clippings.

“How many eggs does a purple martin have in a clutch?” Clutch size is typically three to six eggs, but Rick Mammel of Albert Lea showed me a nest with seven eggs.

Cherie Daniel of Minnesota Lake saw three adult Canada geese with 25 goslings in their care. She wondered what the story was. Canada geese parents sometimes bring their goslings together in flocks known as “creches” or “gang broods.” All the adults look after the goslings. The adults share the babysitting duties. The geese do this brood amalgamation because the goslings are safer with more adults looking out for danger.

“Be yourself; everyone else is already taken.” — Oscar Wilde

“The most completely lost of all days is that on which one has not laughed.” — Nicolas Chamfort