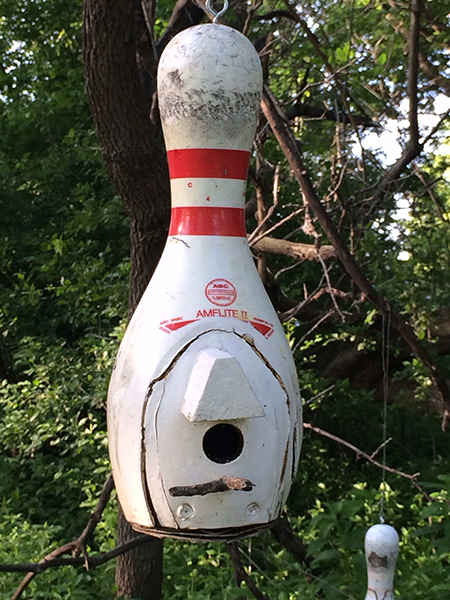 Loren Kaiser of Albert Lea is an avid bowler and birdwatcher, as evidenced by this creation. – Al Batt/Albert Lea Tribune

“Everything is nearly copacetic. They took honey from a tree, dressed it up and called it me. My parents had wanted to homeschool me, but they couldn’t find a home that would have me. I visited the local school for gifted parents last year, when they held a spellcheck bee. Those kids were sharp. One asked me, ‘What has one horn and gives milk?’ I should have known that the answer was a milk truck. I just talked to my accountant. He thinks I should earn more money so that I could pay him more. I don’t know why I should even pay taxes.”

“Because you are a citizen of a great country and you feel entitled to good roads, an education, police and fire protection…” I say before being interrupted.

“Apply your brakes, pilgrim. Your argument has some gaping holes in it. I think that when the government prints the money, they should keep a chunk of it, give us the rest and then leave us alone. Then they could get rid of all the IRS people and use the money they were paying them for stuff the government should be doing if they had the money.”

There is a legend that says if a cat stares out the window, rain is on its way.

If our two tethered-to-the-indoors cats are any measure, it’s going to rain every day.

They watched intently from their windows of choice as I walked down the drive to retrieve the mail.

A large shadow moved across the driveway in front of me.

A vulture rocked in the sky above. Red admiral butterflies flitted about. They feed on tree sap, fermenting fruit, bird droppings and nectar. Their caterpillars eat nettles.

Later in the day, the vulture was replaced with lightning, thunder and fireflies. Nature’s fireworks. Rain fell softly. The cats seemed even more smug than usual. They were right again. Ho hum.

“Do you have any tips for taking photos with an iPhone?”  Not many. Get as close as possible. Use both hands to stabilize the phone’s camera. Use the volume buttons to trigger the shutter, instead of pushing the button on the screen. This eliminates some movement. If possible, provide stabilization by placing the phone or arms on a fence, table, chair, etc.

“How long do mosquitoes live?” Mosquitoes are relatively fragile with an adult life span for males that lasts about two weeks and a couple of months for females. The majority serves as food for birds, dragonflies and spiders or is killed by the effects of weather. Mosquito species that have only a single generation each year or hibernate in the adult stage are longer lived.

Connie Hoyne of Albert Lea asked if squirrels eat mushrooms. They do. Some red squirrels hang fungi between tree branches to dry so that it stores better over the winter. Other animals such as deer, mice, chipmunks and rabbits eat mushrooms.

Shari Kohnen of Canton asked how many broods a house wren has each year. They have one or two with three to 10
eggs in a clutch. The incubation period is 9–16 days with 15–17 days in the nestling stage.

Rod Meyer of Mankato asked, “Is it unusual for the male cardinal to feed the female seeds from our feeder?” This habit is called “mate-feeding.” The male picks up a seed, moves over to the female and they touch beaks as she accepts the food. Mate-feeding continues through the egg-laying and incubation phases of breeding. They typically have a couple of broods each year. Mate-feeding is part of the pair-bonding process. It gives the female a hint of how good a provider the male would be. It’s cheaper than buying jewelry.

Ken Leland of Albert Lea asked, “Where are the birds?” We often notice a lack of birds due to an absence of goldfinches at the feeders. I watched a male goldfinch declaring his territory by singing and performing flying displays featuring exaggerated undulations and endearing loops. Goldfinch numbers at the feeders increase in July because they are beginning to nest. Hummingbirds multiply in number as they complete nesting and begin wandering southward. Many other species bring their fledged youngsters to feeders.

Russell Anderson of Albert Lea, who I’ve had the pleasure of knowing for years, starting back when he was a hardworking life insurance salesman (I wonder if anyone carries that title today?), presented me with a delightful example of marquetry (marqueterie), the art and craft of applying pieces of veneer to a structure to form decorative patterns, designs or pictures. Russ had acquired this masterful artwork during his travels. It’s wonderful, as is Russ.

Thanks to all those who have joined me on the Pelican Breeze floating on Albert Lea Lake. You have enhanced my existence.

Albert Lea Audubon Society will have a booth at the Conservation Building at the Freeborn County Fair from Aug. 4 through Sunday, Aug. 9.

“I wanted to change the world. But I have found that the only thing one can be sure of changing is oneself.” — Aldous Huxley

“When you arise in the morning think of what a privilege it is to be alive, to think, to enjoy, to love.” — Marcus Aurelius