Funeral services for Oscar J. Adams will be at 11 a.m. Monday at St. Theodore Catholic Church in Albert Lea. The Rev. Russell Scepaniak and Deacon Michael Ellis will officiate. Visitation will be from 9:30 a.m. until the time of the service at the church. 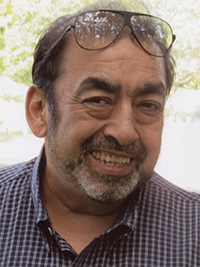 Oscar passed away surrounded by his family on Thursday, July 2, 2015, at Mayo Clinic Health System in Albert Lea. He was 65.

Oscar Joe Adams was born Sept. 15, 1949, in Albert Lea to Paul and Alejandra (Gutierrez) Adams. He was a lifetime resident of Albert Lea. When he was 17 he began working for Albert Lea Seed House and continued working for them until his health would no longer allow it.

Oscar was united in marriage to Nora (Cantu) Dec. 4, 1968, in Albert Lea. Oscar was a member at St. Theodore Catholic Church.

In his free time Oscar enjoyed hunting, fishing, bird watching and tinkering with anything mechanical. In his earlier years he drove in demolition derbies around the area. Oscar loved his grandchildren and cherished every moment they spent together. He was smarter than most people gave him credit for and he was always someone that could be counted on. He will be missed by everyone who knew him.

He is preceded in death by his parents; a 16-year-old son; three children in infancy; and his brothers Paul Adams Jr. and Gilbert Adams.