The difference among yellowjackets, honey bees and bumblebees 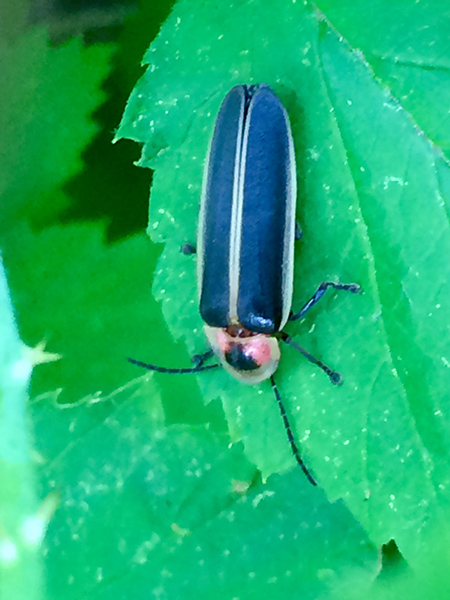 A firefly rests on a leaf. Al Batt/Albert Lea tribune

“Everything is nearly copacetic. My uncle Ernie believed in always giving 100 percent. He should never have given blood. I bought a new, old car. It’s a PT Cruiser. I guess that means I’m having a midlife Chrysler. I haven’t read the owner’s manual yet. That’s odd because I’m an avid reader.”

“Remember that time Weasel picked us up in his old Ford and we went for a drive on the Fourth of July? He was smoking one of those “It’s a boy” cigars, the smelly kind that left your mouth tasting like you’d had lunch with a coyote. Cherry bombs were illegal, but Weasel had obtained one from somewhere. He was driving along when we met a police car. Weasel panicked. He was sure the officer had given him the look. If he hadn’t given him the look, he should have. Weasel was always up to something. Weasel didn’t want to be nabbed for possessing illegal fireworks, but he still wanted to make some noise, so he used his cigar to light the cherry bomb and then tossed the explosive out the window. Boy, I wish that window had been open.”

“Did you say something?”

I listened to a catbird singing; roaring like a lion demanding to be heard. There is an honor in listening along the mighty Le Sueur.

The Le Sueur River has its source in the township in which I live. The river flows north. Many people find that odd, but water flows in one direction. That direction is downhill.

When I was a boy, kids gathered at the bridge situated on a gravel road known for its infrequent and slow-moving traffic. We called the river a creek and it was amazing. We dropped small sticks from one side of the bridge and then scampered to the other side to see which stick won the race. The winner got to make a wish. One of my wishes must have been that I’d always find fascination in simple things.

Three small grandchildren gathered lightning bugs. They carried on a tradition. I’d done the same thing at their age. They brought the insects in a victory march. They released them unharmed in exultation. We gather experiences just as we gather fireflies. A few days earlier, I’d seen northern lights dancing across the sky. They had nothing on the fireflies. I go forward in hope.

“Do any birds hibernate?” The common poorwill can slow its metabolic rate and drop its body temperature, allowing it to go into a hibernation-like state called torpor. Although probably not a true hibernation, topor allows the poorwill to go long periods without food and helps it survive cold weather when insect prey isn’t available.

“Why is it called a “birdie” in golf?” Birdie means a score of one stroke under par. It comes from the early 20th century American slang term “bird,” meaning excellent. Eagle, a score of two under par for a hole, was a natural extension on the theme of birds. Albatross, the term for three under par, is a British term.

“What could I do to attract a harpy eagle to my yard?” Move to the tropical forests of Central and South America, somewhere from southern Mexico to Argentina. The harpy eagle preys primarily on tree-dwelling mammals like sloths, monkeys and opossums. Its talons can be as large as the claws of a grizzly bear.

“Where did the term ‘turkey’ come from in bowling?” Getting three strikes in a row is called a “turkey.” According to the Professional Bowlers Association, in the late 1800s and early 1900s, bowling alleys awarded prizes, often a live turkey, to those bowling three consecutive strikes during the Thanksgiving and Christmas seasons. After the third strike, bowlers yelled, “Turkey!” It wasn’t easy to bowl consecutive strikes then. Bowling alleys used pin boys to set up pins instead of the automated pin-setting machines of today. Manually set pins lacked consistency in placement. Bowling balls didn’t have the advanced technology that allows for better control today. Six consecutive strikes are called a wild turkey and nine consecutive strikes are a golden turkey.

Glenda Batt of Albert Lea asked about yellowjackets. A yellowjacket is a black and yellow wasp, relatively slender with few hairs. Honey bees are brown and black, and more hairy than yellowjackets. Yellowjacket nests hang from trees, are attached to buildings, are hidden in cavities such as wall voids in buildings or are subterranean as in old rodent burrows. Honey bees typically nest in artificially constructed hives, but will nest in cavities. Honey bees don’t nest in the ground, but bumble bees do. Bumble bees are stout, black and yellow, and hairy. Both yellowjackets and bumble bees have annual nests, lasting one year. They die when freezing temperatures arrive. Honey bees have perennial nests that survive winters and can last years. Yellowjackets are important predators of caterpillars and flies, but do minimal pollinating. In late summer and fall, they become aggressive in their appetites for our foods. The only yellowjackets that survive the winter are newly mated queens that have left the nest. Next spring, they start nests in different sites.

“I don’t want to get to the end of my life and find that I just lived the length of it. I want to live the width of it as well.” — Diane Ackerman

“Insults are the arguments employed by those who are in the wrong.” — Jean-Jacques Rousseau