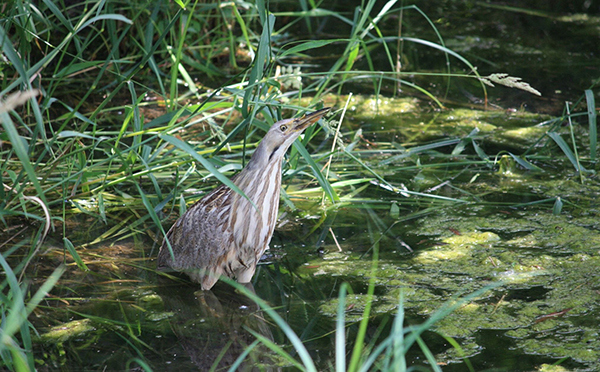 Kent Gernander of Rushford took this picture of an American bittern, also known as the “slough pump.” -Provided

“Everything is nearly copacetic. You know, Archie Johnson and Archie Nelson both fell on the ice last winter. They fell on the same day. I visited them at the hospital. They put them in the same room. The room of fallen Arches. I remember when the Archies and I showed up to school and our teacher told us that she was going to test our IQs. Unfortunately, we hadn’t brought ours to school that day. My cousin Wally Jr. told his father, my uncle Chandler, about it and Chandler has called me Einstein ever since.”

“That brings up a question. Why is your cousin named Wally Jr. when his father’s name is Chandler?” I say.

“That’s a question for the ages. I did ask uncle Chandler how he met his wife. Chandler has only one eye. He went into the drugstore where my future aunt Ruth was working. He saw her slaving under a bright light and the light caused him to sneeze. His glass eye dropped out of its socket. Ruth caught it on one hop.”

“There was something about her that caught his eye.”

There was a lump on the road going past our place.

It was a raccoon that had forgotten to look both ways before crossing the road.

The feeders in the yard were nearly covered in goldfinches. It was a glorious sight. “Finch me! I must be dreaming,” I said to everyone and to no one.

Youthful Baltimore orioles fed on grape jelly provided by feeders. A catbird waited its turn. “Orange you glad you’re a birder?” I asked myself.

The catbird, a talented and persistent vocalist, had no response.

“When do Baltimore orioles leave?” When young Baltimore orioles become independent, the parents begin molting. Migration for Baltimore orioles peaks in August and early September. They migrate at night because there are no hawks to prey on them, the winds are typically calmer, making for smoother flying, cooler temperatures lessen the chance of overheating, the stars aid in navigation and the birds can feed during the day. Orioles nest once a year. So they might be done raising a family anytime from July to mid-August. That leaves them free to move around or to migrate. Some adults become secretive when they begin their molt at the end of July and may not visit feeders.

“How do you pronounce “plover”? It either rhymes with “lover” or with “over.” I hear birders say both, with probably more saying PLUH-ver than PLOH-ver.

“Why are some insects so brightly colored instead of being camouflaged?” Bright coloration among insects and animals can serve as a warning to predators. It’s a caveat to anyone considering trying to eat the animal that they might want to reconsider. Such colorful advertising that indicates an animal is dangerous or distasteful is called aposematic coloration. This warning may also be evidenced in color patterns on the body. The monarch butterfly offers a rather subdued example of aposematic coloration.

“Do great horned owls eat their prey whole?” Great horned owls typically swallow mice and voles whole and cough up pellets containing the indigestible parts later. The owls do hunt larger animals, sometimes eating only the head, which is quite nutritious. They will cache food and feed on carrion.

The Henderson Hummingbird Hurrah will take place in beautiful Henderson on Aug. 15. It is an incredible celebration of not only hummingbirds, but all of nature. Plus, the jubilation is an opportunity to sample small-town charms.

The tentative schedule is as follows.

“Write it on your heart that every day is the best day in the year. He is rich who owns the day, and no one owns the day who allows it to be invaded with fret and anxiety. Finish every day and be done with it. You have done what you could.

Some blunders and absurdities, no doubt crept in. Forget them as soon as you can, tomorrow is a new day; begin it well and serenely, with too high a spirit to be cumbered with your old nonsense. This new day is too dear, with its hopes and invitations, to waste a moment on the yesterdays.” — Ralph Waldo Emerson

“Losing your way on a journey is unfortunate. But, losing your reason for the journey is a fate more cruel.” — H.G. Wells