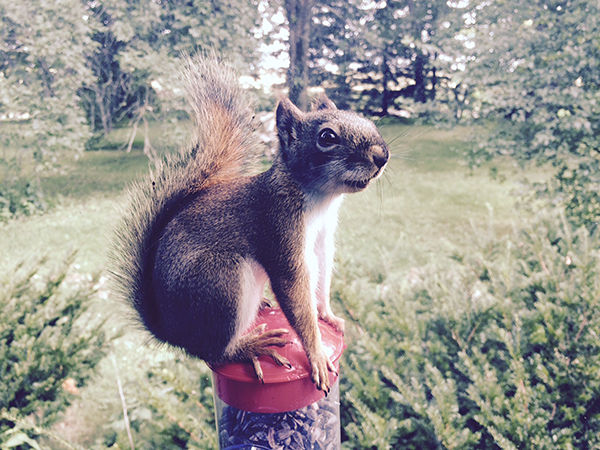 “Everything is nearly copacetic. I don’t think my childhood was as much fun as I remember. It couldn’t have been. I still keep my dirty clothes on the floor next to my clean clothes. My clothes don’t come close to matching. I don’t judge clothes by their colors. I stopped at the Hide & Seek Department at the Pay N Get Out Store. Pop had left his reading glasses there. He uses them to gauge the thickness of toilet paper. Pop bought a used green car there. It’s good for the environment.”

“Neither, it’s one that never starts. That has to be good for the environment. Plus, it forces Pop to walk. He was quite a basketball player in his day and claims he’s still in basketball shape. And he is. Round. I took Pop into a nice restaurant. They brought him a cake with a candle in it and sang, ‘Happy birthday, Dorothy,’ to him.”

“I didn’t know his name was Dorothy. He didn’t care that the cake was meant for someone else. He was so happy, he even ate the candle.”

A red squirrel ate sunflower seeds at a feeder. A turkey poult watched the squirrel. As the seeds fell to the ground, the young turkey gobbled them down. A gray squirrel dozed on a sunny tree branch. The animal was willing to go out on a limb.

An inchworm (measuring worm) moved while looking like a green comma. Carolina grasshoppers appeared, banded wings flashing in flight, reminding me of mourning cloak butterflies. Large and gray-brown in color, they tend to favor the sandy soils of roadsides and other disturbed areas. I begin seeing the males hovering in air and crepitating in late July and August. Shocking, huh? To crepitate is to make a loud clicking sound. This attracts females. These road dusters are chased often by children, but seldom caught without a net.

I spotted a cicada killer. The droning of cicadas during hot weather is a familiar sound. One predator of cicadas is the cicada killer wasp. The black and yellow females are up to two inches long and males half that. They look intimidating, but aren’t aggressive. Male wasps (and male bees) don’t have stingers. The females can sting, but have little inclination to do so. They sting cicadas and carry the paralyzed victims to a burrow excavated in sandy or loose soils. They lay an egg on the cicada in a nest chamber. A female egg gets a second or third cicada because a female larva is larger than a male and needs more food. The chamber is sealed and the process repeated. The egg hatches and the larva consumes cicada meals, spins a cocoon and overwinters underground. Emerging from the ground in July or August, the adult wasps feed on flower nectar and plant sap, mate and lay eggs, and live two to six weeks.

Erwin and Iva Hill of Albert Lea asked about renesting mallards. A mallard hen lays one egg a day, with up to 13 in a nest, often near where she hatched. She incubates the eggs an average of 28 days, leads her brood to water within 24 hours of hatching and stays with them until they are able to fly at about 8 weeks of age. Hens renest up to four times if a nest is destroyed, but she will likely lay fewer eggs due to energy depletion. Mallards typically nest once per year.

“Do I have oak wilt?” Not unless you’re a tree. Oak wilt, caused by a fungus, is most severe in species of red oaks. Wilting starts at the tree’s crown. The leaves turn bronze to reddish-brown in color and are quickly cast to the ground. A water-soaked appearance may develop on green leaves. Wilting and leaf loss can occur in as little as four weeks in branch infections or shortly after spring leaf out following root infection. Affected branches of bur oaks are scattered through the crown with tree death occurring years after symptoms first develop. Bur oak blight and injury caused by borers can be confused with oak wilt. Anthracnose mimics symptoms of oak wilt, but usually occurs in the lower branches. Oak wilt spreads belowground via connected roots or aboveground by insects. Sap beetles are the primary insect transmitters. They are attracted to trees with fresh, wood-penetrating wounds. Cutting root connections between diseased and healthy oaks is the best method to prevent expansion. Wilting red oaks should be felled and eliminated. People shouldn’t move firewood from wilted oaks. Avoiding the wounding, pruning or cutting of healthy oaks, particularly during spring and early summer, is important in preventing fungus spread by sap beetles. Systemic injection with propiconazole by qualified arborists may prevent oak wilt for up to two years in healthy oaks, but won’t prevent movement of oak wilt through roots and isn’t a substitute for severing root grafts. Propiconazole treatment of white oaks exhibiting early symptoms of oak wilt could prevent further disease development for two years, but treatment of red oaks already showing symptoms isn’t recommended. Diagnosis is best done by an experienced tree-care professional.

“Others will underestimate us, for although we judge ourselves by what we feel capable of doing, others judge us only by what we have already done.” — Henry Wadsworth Longfellow

“I believe that if one always looked at the skies, one would end up with wings.” — Gustave Flaubert