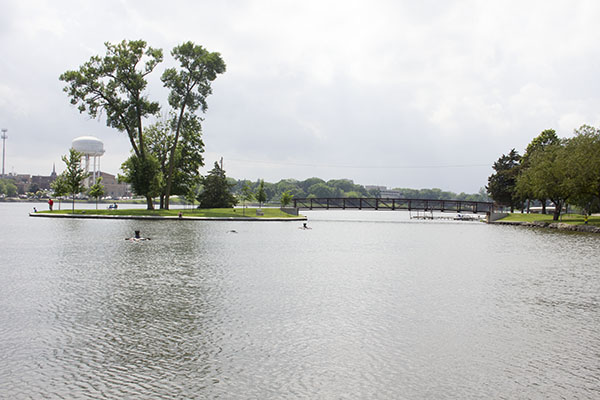 Editor’s note: This article initially appeared on the Front Page of the Minneapolis Star Tribune on Monday.

The sparkling water that made Fountain Lake a source of local pride for decades is long gone, replaced by odorous algae, murky sediment and embarrassing fish kills on beaches in the heart of town.

This southern Minnesota city, known as “The Land Between the Lakes,” became so desperate a few years ago that local authorities quietly treated the lake before each Fourth of July with copper sulfate, a chemical that carried surface scum to the lake bottom, out of sight from summer tourists.

Fountain Lake is slightly clearer today — thanks to millions of dollars in taxpayer-funded cleanups. But a true revitalization of the civic gem and other waters in this heavily farmed region is likely to require more than cosmetic chemicals.

Southern Minnesota’s abysmal water pollution won’t go away, state officials say, unless farmers reduce the heavy use of phosphorus, nitrogen and other chemicals that seep off their fields into local rivers and lakes.

And in Albert Lea, that could ignite a political showdown.

The job of protecting Fountain Lake belongs to the Shell Rock River Watershed District, a special body with its own tax base, millions of dollars in state funding and a full-time staff. Brett Behnke, its administrator, concedes that the volume of agriculture drainage coursing into local waterways continues to increase, but vows to restore the district’s lakes and the Shell Rock River itself with a combination of new and ongoing projects.

“We’re going to clean up these lakes, period,” said Behnke, who is working on the district’s second, 10-year restoration plan.

But state officials and some local citizens note that the watershed district, which is chaired by a major local corn grower, is spending thousands of dollars on restoration projects without addressing the region’s core problem — agricultural runoff.

“It is coming predominantly from the agricultural lands,” Bill Thompson, MPCA’s project manager for the Albert Lea Area, said of the contaminated sediment. “It’s a big concern.”

In a letter dated June 3, the agency objected to the district’s decision to make re-dredging of Fountain Lake a top priority. The agency says it’s unclear whether removing the phosphorus-laden sediment will work in the long run if farm runoff isn’t stopped upstream.

Behnke said the district is drafting a response, but Gary Pestorious, the district’s chairman, said the authority has completed the right amount of upstream work and that farming is not the problem.

“We are at a phosphorus level right now that’s less than half of what it was 15 years ago,” he said. “It’s down to a point in southern Minnesota where you can barely raise a crop.

“If there’s someone who thinks these farmers are farming incorrectly,” he added, “they’re wrong.”

Since the Watershed District was formed in 2003, subsurface farm drainage has only increased, said Freeborn County Administrator John Kluever. When grain prices skyrocketed in 2007, he said, the county’s 340 miles of open ditches accepted an untold increase in runoff. “Farmers were tiling their fields to beat the band,” Kluever said. “We are moving water at a more rapid rate than ever.”

Behnke said the watershed board is studying phosphorus runoff into local streams, but insisted that muck at the bottom of Fountain Lake is a legitimate target because it, too, is constantly releasing phosphorus. The dredging project, he said, has so much community support that the watershed district has come under fire for delays.

The Shell Rock River, which drains lakes around Albert Lea before meandering off toward Iowa, becomes blanketed in spots with so much algae that it takes on the glowing sheen of a golf course putting green. The MPCA has found that the river has too little dissolved oxygen to support full aquatic life and too much bacteria to be safe for swimming.

Upstream on Fountain Lake, within view of Albert Lea City Hall, conditions have improved enough to spark a state-designated water trail with portage sites. And nearby Albert Lea Lake has a new landing that hosts canoe and kayak rentals.

Nevertheless, the lakes remain visibly contaminated. Dead fish littered the green-hued surface of Fountain Lake this spring, said Jerri Fogal, who lives on one shore, and after heavy rains the water turns black.

“I wouldn’t want my grandchildren swimming in it,” Fogal said.

Since the Minnesota Board of Water and Soil Resources helped create the Shell Rock watershed district, two of its leading members have been Pestorious and Al Bakken, another prominent farmer. Pestorious, who was re-elected last month as chairman, is a conservation award winner who runs a 7,000-acre family farm and ag business. He’s been a national figure in the promotion of biofuels and is part owner of the corn ethanol plant in nearby Glenville.

That causes some Albert Lea residents to wonder whether it’s pro-water or pro-farmer. When Gov. Mark Dayton was pressing the 2015 Legislature for a bill mandating protective buffer strips on many Minnesota farms, Pestorious and the district formally opposed the idea — even though their mission is protecting water. Behnke said the vote was based on details of Dayton’s plan rather than its intent, but it reinforced local doubts.

“They’re all big-shot farmers,” said Rick Koziolek, one of many rural Albert Lea residents who has grown skeptical of the group.

Critics like Koziolek point to a decision by the district to order wide-scale inspections of private septic systems years ago. When inspectors find deficiencies in a private septic system, state law requires homeowners to make fixes that can cost as much as $15,000, which rankled many in the community. Behnke said the sweep has affected farmers as much as anyone else, and led to a halt in straight-pipe emissions of raw sewage into waterways.

But Koziolek and Gaylen Schewe, another Freeborn County homeowner who faces an expensive septic update, said they view the program as a way for the watershed district to deflect attention from farmers and fertilizers.

“They [farmers] are the ones causing the pollution,” Schewe said. “It’s not the little guy with his septic system.”

He said the district has been heralded for helping Freeborn County install one of the most comprehensive buffer-strip programs in the state, and for restoring game fish and ducks to nearby Pickerel Lake.

“I think it’s a watershed that has done more to clean water up than any other watershed in the state,” Pestorious said.

The district has certainly proved a hit with Minnesota’s Lessard-Sams Outdoor Heritage Council, which distributes grants from the state’s special Legacy tax funds. It has given the watershed district four grants from the Legacy fund, and another $2.4 million this year to undertake small-lake restorations.

If only it was that easy to clean up Fountain Lake, which has been dredged numerous times, only to be re-polluted by incoming sediment.

The watershed district spent $726,212 on dredging equipment in 2012, but has yet to complete a dredging plan or even apply for the necessary permits. “It’s dragging on with no results,” City Council Member George Marin said.

“This was supposed to be collaborative, but they’ve gone their own way,” Erdman said.

Behnke said the criticism from politicians is unfounded, prompted by ordinary political jealousies.

“We’ve got to clean up something that’s been polluted for 100 years,” Pestorious said. “You don’t just snap your fingers and do that. But we are doing it as fast and as well as we can, and we are also doing it in a farming community.”

Read an article on the local response to the Star Tribune’s story here.