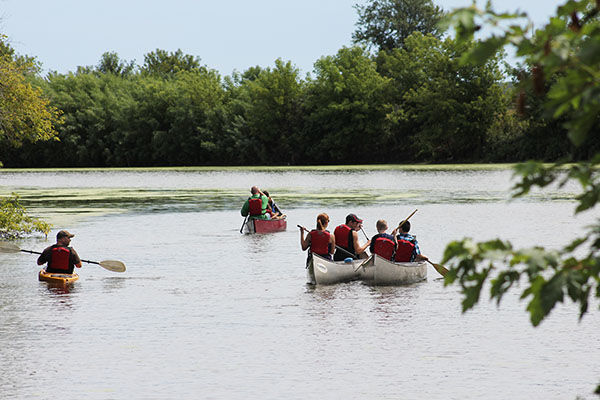 “The reporter wanted the story to go a certain way and the reporter portrayed it that way,” said Brett Behnke, watershed district administrator. “We have proven water quality data that shows we have been making progress and improvement.”

Calls to the Star Tribune newsroom this morning were not immediately answered.

The article said the watershed district has spent $726,212 on dredging equipment in 2012, and has yet to complete a dredging plan or even apply for the necessary permits. However, Behnke said it will take time for the district to make even more progress.

“We’ve only been working on this for 10 years,” he said. “We’re only halfway through a project. You can’t take a snapshot of the watershed district and say it’s not working. Let us complete the project, then criticize it. This problem occurred over many years, and it’s going to take time to fix it.”

In 2014, the watershed district received $7.5 million in funding from the state of Minnesota to implement the Fountain Lake restoration project. The goal of the project is to dredge the accumulated sediment in Fountain Lake and ultimately improve the lake’s water quality, fishery and recreational opportunities, Behnke said.

He said the watershed district by statute is required every 10 years to update its water management plan. He said the district just completed its first 10-year plan and is now underway on a second 10-year plan.

“You can’t do everything in 10 years,” he said. “It takes time. We do a lot of work at the state level and we are very successful.”

Behnke said the district is working at improving the Shell Rock River that was part of the focus of the article.

“The farmers want what we want,” he said. “Over the last 10 years, precision farming has come full swing and with that farmers can plant fertilizer right where they need it and that has helped us.”

He said the district is not at odds with the Minnesota Pollution Control Agency and the district is working with them to clean up the water. He said there are differences of opinion between the organizations. Behnke also denied the article’s claim that the district formally rejected Gov. Mark Dayton’s bill mandating protective buffer strips on many Minnesota farms.

Scott Hanna, environmental learning center coordinator for Albert Lea Community Education, said from a visual perception, water quality in the watershed district is considerably better than what the article described it as.

“If you’re going to say the water is contaminated, you should show historical data to show that and the point it’s at,” Hanna said. “The article is implying that money spent on the project has been wasted and the project is at a standstill. That’s just not true.”

Hanna said dock users are reporting being able to see the bottom of Fountain Lake for the first time in years.

Lunde said Fountain Lake has been close to meeting or exceeding MPCA standards on water quality since 2009.

Tests conducted on the main bay of Fountain Lake near Albert Lea’s hospital showed an average visibility of two to three feet deep since 2009. To measure the lake visibility, watershed staff use a white metal disc called a secchi disc and lower it into the water. They measure how deep they can go into the lake and still see the disc.

Disc readings in Pickerel Lake have shown major improvement since 2010. The readings showed visibility on average of four feet deep, which is above state standards.

Phosphorous in Pickerel Lake has also declined in the same time frame.

Lunde said during the Albert Lea Floats event this weekend many people were saying they could see four to five feet to the bottom of Albert Lea Lake.

“As a lake advocate, I am thrilled by the results we are seeing in such a short time,” she said.

“The watershed district is putting their best foot forward to doing the right thing and producing results.”

The Tribune was unable to talk with the MPCA as of press time.

See the original article published in Monday’s edition of the Star Tribune here.