Are there albino insects? What about native wild cucumber? 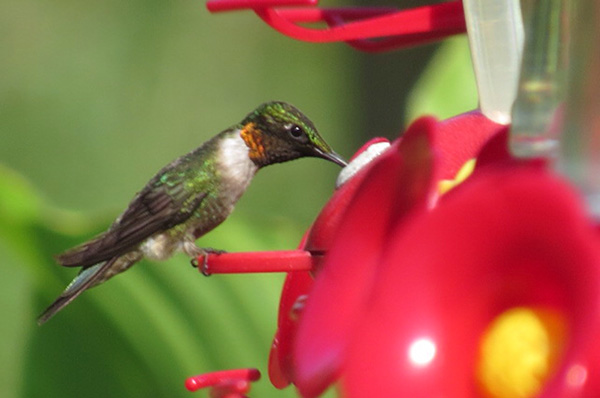 “Everything is nearly copacetic. I’ve learned a couple of things this week. I finally fixed that dripping faucet. That duct tape is a miracle worker. I’ve found that each time I look in a mirror, I realize that they don’t make mirrors like they used to. I’ve discovered that I’m great at multitasking. I eat while watching TV. Sometimes I do both of those things while hating roundabouts. I have unlimited talk on my cellphone, but when I get the bill I’m reminded that the price of listening is killing me. Pop’s dentures don’t fit him. They’re loose. Every time he sneezes, everyone ducks. But what drives Pop crazy are the squirrels raiding his birdfeeders. He can’t take his much needed and well-deserved naps. He was so exhausted that he went to see Doc Splint Eastwood. Pop had become a doorstop that drooled. Splint gave him a prescription for some sleeping pills that worked like a dream. But Pop still wasn’t getting an afternoon nap.”

“I don’t know. Whenever Pop was able to catch a squirrel, it refused to swallow one of the pills.”

I saw a male cardinal. It was so, searching for a word here, red! I found a turkey feather on the lawn. At the end of summer many birds begin to replace feathers in a molt. When we had free-range chickens, it could take them one to two months to complete a molt. Wild birds are about the same. Most songbirds take one to two months, with the largest, the common raven, taking four or five months. Molting can be more complicated for larger birds, because larger feathers take longer to grow. That’s why some birds undergo partial molts. Molting leaves ducks and geese flightless. Some species acquire adult plumages in a single year. Others, such as bald eagles, require up to five years.

I put out a bit of food for the crows. They raised a ruckus. When the noise subsided, they flew in and grabbed the grub. Loud sounds, food gone. Caws-and-effect.

“Is there a good online source of birdsongs?” There are many, but one of the best is xeno-canto. It’s a website dedicated to sharing bird sounds from around the world.

Paul Schwab of Owatonna wondered if fledgling male goldfinches will be yellow now and then change before winter or get their first yellow in the spring? The young males do get some yellow feathers earlier, but don’t turn bright yellow until their second summer. The more mature the adult male, the more extensive the bright white patches on his tail feathers. An interesting aside is that a goldfinch’s legs, feet and bill change from a dark grayish brown to a buffy yellow-orange color in the spring.

Karen Wright of Mankato asks if there are albino insects. I’m not aware of any albino insects or spiders. Insects endemic to caves or those in the immediate aftermath of shedding exoskeletons could be white.

Daniel Otten of Hayward asks if we’ve had wild parsnip for long and if wild cucumber is native. As a boy, I knew wild parsnip as a tenacious weed that the cows wouldn’t eat. The plant looks similar to Queen Anne’s lace, but the flowers are yellowish-green instead of white. The three to five foot tall stalks of parsnip have narrow ridges and small yellow flowers, blooming in June or July in clusters called compound umbels. The juice of parsnip on skin exposed to sunlight can result in a burn. This is called phytophotodermatitis and the skin discoloration may last two years. Wild parsnip is native to Europe and Asia, and is found throughout most of Minnesota where it’s increasing its density. According to the records of the Wisconsin State Herbarium, the plant was recorded in Wisconsin in 1896. Some scientists believe colonists brought the plant here in the 1600s. In reading “Child’s History of Waseca County,” I found wild parsnip mentioned in 1858. In late summer, trees or shrubs are festooned with wild cucumber vines that produce fragrant, yellowish-white flowers. The fruit resembles a small, round cucumber with spines on it. It’s a fast-growing, warm season annual that is native.

Arnold Koelpin of New Ulm asks why he didn’t see many June bugs this year. I don’t know. The insects, also called May beetles or June beetles, are about 1 inch long, a chestnut-brown color and fly to lights in early summer. The grubs are whitish with brown heads, are usually found curled in a “C” shape and range from 1/2 to 1 inch long. These are the largest grubs found in turf. I didn’t see many either.

“Be kind to everyone. Don’t throw anything out of car windows.” — Al Batt

“Karl Marx was right, socialism works, it is just that he had the wrong species”— Edward O. Wilson

“I tried to discover, in the rumor of forests and waves, words that other men could not hear, and I pricked up my ears to listen to the revelation of their harmony.”— Gustave Flaubert