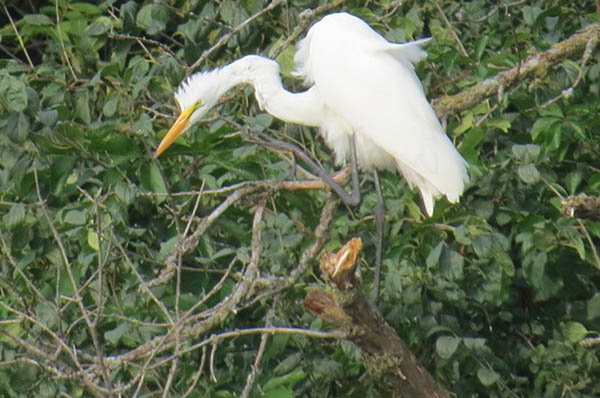 The great egret is the symbol of the National Audubon Society. – Al Batt/Albert Lea Tribune

“Everything is nearly copacetic. I’m having a bad mirror day after running a marathon. I finished it in just two blocks. Why is the government wasting our tax money by putting up signs telling deer where they should cross the roads? When it comes to days that stink, yesterday was a classic.”

“They were serving cabbage and rutabagas at the Eat Around It Cafe again?” I say.

“Bingo. My cellphone hasn’t been working. I took it to a guy who is supposed to know what is wrong with it, but if excuses are a dime a dozen, he had $100 worth. That’s stupid. If I had $1 for every time I’ve said, ‘That’s stupid,’ I’d say ‘That’s stupid’ a lot more often. You know, I’m on the information highway, but my blinker is on. Speaking of highways, if people haven’t adopted a highway, they certainly drive as if they own it. Am I the only person in the country who knows how a four-way stop works? I rewarded myself for my knowledge by going to Dollar General and buying four suits for a dollar.”

The day had many charms.

Minnesota does fall weather well, but not often and not always in the fall.

Monarch butterflies stopped by on their way to Mexico. I heard hope and joy in the calls of the goldfinches. I received sanctimonious scolding from blue jays for not offering them peanuts in the shell.

A red-tailed hawk circled above. As I watched the raptor set sail, I thought of the musical, “Oklahoma,” “Watch the hawk, making lazy circles in the sky.”

“Do swallows reuse their nests?” Barn and cliff swallows repair and reuse old nests. Cliff swallows nest colonially in gourd-shaped mud nests, often on bridges or the outsides of buildings. Any swallow building a nest inside a building is likely a barn swallow, which builds a cup nest of mud.

Tom Belshan of Glenville asked if Chinese elms are susceptible to Dutch elm disease and if milkweed is a perennial. Dutch elm disease is a fungal disease discovered in Minnesota in 1961. It’s capable of infecting all native Minnesota elm trees, which includes American elm, red or slippery elm, and rock elm. Chinese elm (which isn’t hardy in Minnesota), Japanese elm and Siberian elm are resistant, but not immune to the disease. Siberian elm, often colloquially called Chinese elm, is distinguished from native elms by its small leaves. Chinese Elm (lacebark elm) has a flaky rather than furrowed bark and flowers in late summer or fall. Milkweed is a perennial that reproduces by seeds and rhizomes. Common milkweed flowers in pinkish-purple clusters and the fruits are spindle-shaped pods. The brown seeds are attached to tufts of white, silky hairs. Once the pods dry and split open, the seeds become wind-borne.

“How can I keep the neighbor’s cat out of my yard?” Ask your neighbor to keep the cat indoors. It’s better for the cat. Some folks humanely trap cats. Check local laws first. Some animal control agencies or shelters lend live traps. Sardines are good bait, but you may catch a wild animal. Check traps often. Some people try to discourage cats by spraying them with a garden hose. This is an effective deterrent only if the cat gets sprayed every time it’s in your yard. A cat-proof fence. Putting bells on a cat’s collar doesn’t prevent predation on birds. A bird doesn’t necessarily associate the sound of a bell with danger. Well-fed cats kill birds because the urge to hunt and the urge to eat are controlled by different parts of the brain. Declawing a cat doesn’t stop predation.

“I saw a monarch butterfly with only four legs. Shouldn’t it have six?” A monarch’s thorax has three segments. Each segment has a pair of legs attached. The second and third segments also have a pair of wings attached. Monarchs appear to have only four legs because the two front legs are tiny and curl up next to the thorax.

“I saw a huge green and blue dragonfly. What was it?”

A green darner is a large dragonfly that can be over 3 inches long, with a wingspan of 4 1/2 inches. It has a green thorax (middle section of body). Males have a blue abdomen (back part of body), while females have a purplish-gray abdomen. Green darners are found near water sources.

Thank you to all who piled aboard the Pelican Breeze. It was great being in your company. I’m sorry there wasn’t room for everyone.

“Science has proven that ‘I before E except after C’ is a myth.”  — Al Batt

“I like living. I have sometimes been wildly, despairingly, acutely miserable, racked with sorrow, but through it all I still know quite certainly that just to be alive is a grand thing.” — Agatha Christie

“On the last day of the world I would want to plant a tree.” — W.S. Merwin