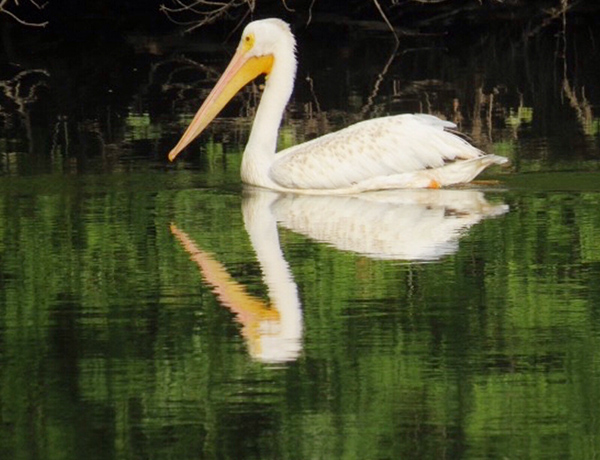 A pelican swims with his reflection. – Al Batt/Albert Lea Tribune

“Everything is nearly copacetic. My sweet corn crop was fantastic this year. It was two ears to the truckload. I had to listen to my sister Cruella sing, “I’m so miserable without you, it’s like having you here” while I made myself a bowl of raisin bran for lunch. What a job that was. I hate cooking for one. Wind power sure has a lot of fans. I operate on fly power. There is a species of fruit flies that specialize in my smelly sweat socks. I fell asleep in church Sunday. I snored. When I snore, I sound like a McCulloch chainsaw. People are mad at me.”

“You can’t blame them. I don’t suppose they could hear the sermon,” I say.

“No, that’s not why they’re mad at me. They’re mad at me because I kept everyone else awake. The young’uns gave me one of those tablets for my birthday. I think it’s called a mePad.”

“I know. You called me because it wasn’t working,” I say.

“And you told me to reboot it. So I turned it off, but it’s still not working. You know diddlysquat about mePads.”

“You’re supposed to turn it back on again,” I add.

The bird world had quieted, as it does every year at this time. I heard the wings of orioles leaving my yard for the year. Even the house wrens had run out of songs. A friend constructed the nicest of wren houses. He built it, but unlike the Field of Dreams, they didn’t come. We had a welcome sign and a tiny, decorative birdhouse on our deck. The wrens nested in it — until the bottom fell out of the housing market. The floor of the birdhouse dropped to the ground. House wrens don’t care what their houses look like.

The pungent aroma of skunk wafted through the air. A car near our home had hit the animal. The skunk left a legacy. There are people who find the scent enchanting. I’m not one of those.

Common grackle numbers in yards decrease by midsummer, but as they prepare to migrate, they may reappear in large flocks with many young birds. Most people are happy with their absence due to the waste management techniques of grackles. The young produce fecal sacks that the parents carry to water or a freshly washed car for safe disposal.

“How do birds find enough food?” They are experts at finding food.

“What are the swarms of small insects in my yard?” Swarms are for the perpetuation of the species. Winged ants, males and queens, are harmless. Those I’ve just seen are named large yellow ants, sometimes called citronella ants because of a smell they emit. There are great numbers of flying ants because the failure rate is high. Birds or dragonflies eat many of the swarmers. Large yellow ants tend aphids much as dairy farmers do cows.

“Do we have chiggers in Minnesota?” We do. The six-legged larva of a chigger attaches itself to a variety of hosts to feed. Once engorged, it leaves the host to become a nymph. Both nymph and adult are eight-legged. Nymphs and adults feed on insect eggs or small soil invertebrates. Chiggers require 50 to 70 days to develop from egg to adult, with one generation per year in Minnesota. The larva positions itself atop a blade of grass or fallen leaf in a shaded area and seeks a host. A search of the skin after a walk through tall grass or weeds might reveal tiny red mites moving quickly or attached to skin. Intense itching occurs three to six hours after exposure, followed by skin inflammation. The itching is usually along tops of socks, behind knees or around the waist, and may persist for days. They don’t burrow into the skin, but feed on tissue broken down by their digestive fluids. The host’s skin hardens and a tube forms for the mouthparts. It’s the digestive fluid that causes itching.

“I used to live in a room full of mirrors; all I could see was me. I take my spirit and I crash my mirrors, now the whole world is here for me to see.” — Jimi Hendrix