Saying goes if the swallows leave early, winter will be a hard one 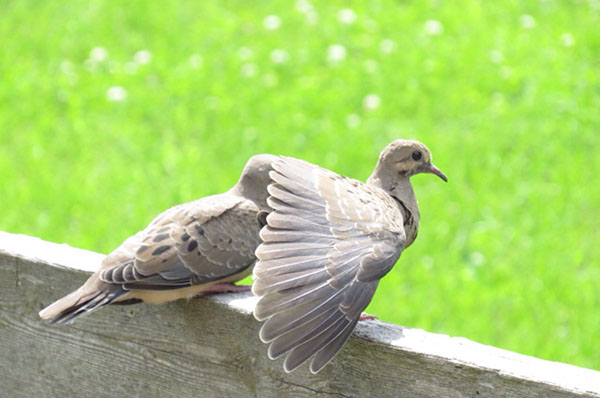 “Everything is nearly copacetic. I was having a wonderful day. It’s a pity that other people are allowed to spoil it. I needed a break from gardening, all I was growing was tired, so I went to a couple of farm shows. I love those things, but am I the only one who names his tractors? I have a cousin roofing my house. He and his three brothers. He told me that it’d take him only about three days, but if his entire family helped, they’d be done so fast I wouldn’t even need to feed them lunch. I call them all “cuz.” I’m great at remembering names, but I’m not so good at remembering whom they belong to. Those boys lost both their parents when they were still little kids. What a poker game that must have been. I don’t have a lot to do until harvest. Fortunately, I idle well at the cafe. Sugar is bad for me. Caffeine is bad for me. Fat is bad for me. I don’t worry about it though, because worry is bad for me. Pop is getting shorter, but he doesn’t worry about it. He tells everyone that the floors are getting taller.”

A beast with soundless wings. A bird. An owl. A messenger of wonder. A great horned owl had been rousted from its daytime roosting place by blue jays and crows.

Green cloverworm moths flitted about. They have conspicuous snouts and wingspans of an inch to an inch and a half. The charcoal gray, brown and silver moths hold their wings in a triangular-shape when at rest. The larvae feed on a wide variety of plants, including alfalfa, bean, clover, elm, hackberry, ragweed, raspberry, soybean, strawberry and willow. They don’t survive Minnesota winters.

A twisting procession of what appeared to be mostly red-winged blackbirds and common grackles moved over a cornfield. A flock of Canada geese flew far above them. They could be geese that summered here or geese that left here and flew as far north as Canada in a molt migration. By mid-June, non-breeders and unsuccessful breeders fly north to a secure molting location. In September and October, with some local variation, they make their second migration of the year into Minnesota.

I saw cedar waxwings with plumages so sleek they appeared to not be made of feathers. I chopped burdock. Velcro was modeled after the burs of burdock that stuck to the inventor’s pants. I’ve found dead goldfinches and kinglets stuck to the burs of this plant. I don’t want to find any more birds that have died that way.

I had a pleasurable visit with John Tenneson and his sons Will and Fred of Clarks Grove. A sharp-shinned hawk had attempted to pursue a house sparrow into John’s business, Omni Automotive. The hawk hit the front window of the shop and hit it hard. John and his boys told me, “That was one lucky sparrow.”

The hawk had been dazed and confused after the collision, but it recovered enough to fly away. It was one lucky hawk.

My wife asked, if whooping cranes have migrated for an eternity, why do they need to be trained to fly behind an ultralight aircraft? Operation Migration has played a lead role in the reintroduction of endangered whooping cranes into eastern North America since 2001. In 1941, the last migrating flock had been reduced to just 15 birds. Using ultralight aircraft, Operation Migration pilots act as surrogate parents and guide captive-hatched and imprinted whooping cranes along a migration route beginning at Necedah National Wildlife Refuge in Wisconsin and ending at Chassahowitzka NWR in Florida, 1250 miles away. It’s similar to the ultralight that led the Canada geese in the film “Fly Away Home.” Precocial birds like cranes, geese and swans learn to migrate by following adults. Whooping cranes reach sexual maturity at the age of four to seven. With good luck, they typically raise a single colt. Blackflies have driven cranes from nests in recent years. Migration is a perilous journey. For example, peregrine falcons shadow shorebird migrations.

“What are the round spider webs I’m seeing?” Orb-weavers make the intricate, wheel-shaped webs that shimmer in a garden or between tree branches. I’ve no doubt that these lower mosquito populations. The most common orb-weaver we see is often referred to as the garden spider, also called black and yellow garden spider, black and yellow Argiope, writing spider and golden orb-weaver. Some orb-weavers remake their webs every day. They eat the silk from old webs and recycle it into new webs.

Randy Schindle of the Minnesota Department of Natural Resources said he has a way to reduce the numbers of some of our invasive species. He told me that we should all eat Asian carp cooked over a buckthorn fire and seasoned with garlic mustard.

Jerry Peichel a farmer from Fairfax told me, “If the swallows leave early, the winter will be hard.”

“Write it on your heart that every day is the best day in the year.” — Ralph Waldo Emerson

“I don’t even correct people when they mispronounce my name now.” — Ann Beattie