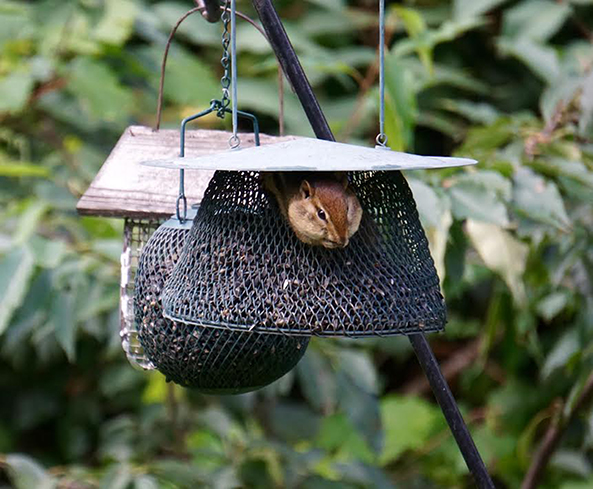 A chipmunk finds food and security in a feeder. – Al Batt/Albert Lea Tribune

“Everything is nearly copacetic. Every dog has to carry its own tail. I need sleep. My snoring keeps setting off The Clapper that controls the lights. I’m working on my latest invention. It’s a glass toaster so I’ll be able to watch the bread turn into toast. The thought of that thrills me. I went to the salad bar at the Eat Around It Cafe. I ordered a vodka and lettuce. I got a dirty look instead. I took a tractor to the Garage Mahal. They’ll fix anything while you wait, even if you have to wait two weeks. Unfortunately, the day I was there was ‘Bring a pillow to work day.’ Have you ever had one of those days when everything is perfect? Everything goes just the way you wanted. Your wish is everyone’s command.”

“Me, neither, but things are good. If I didn’t have that bull mouse in the house, things would be better. But the corn crop is good. The bean crop is terrific. I’m a much better farmer than I thought.”

“I suppose your chickens are laying eggs the size of grapefruit?” I wonder aloud.

“Of course not, but my pigeons are.”

Things that go more than bump in the night

The blue jays of the yard were having a collective cow. A collective noun for those birds is a party. A party of jays is appropriate at times, but this wasn’t one of them. Their calls were of outrage. For a few days, the only yard birds were the occasional chickadee or nuthatch at the feeders and the jays calling from the woods. A trespassing yellow tomcat walked past the house. I yelled at it and it hightailed it. The jays didn’t chase after it. There was something else. Then I saw it, a sharp-shinned hawk flew across the road. It’s a small raptor, but terrifying to tiny songbirds.

I remember when we were young kids. We climbed out the upstairs bedroom window and found our way to the ground. The goal was to venture into the nighttime woods. Georgette, my niece, and I are the same age. She called me Uncle Allen only when she wanted to irritate me. She was hesitant about traipsing off into the land of dark trees, but I convinced her by showing her my slick flashlight. It was nothing more than a storage unit for dead batteries. No matter how bright a light it showed indoors, the batteries went dead immediately upon contact with the night.

We walked into a night blacker than the inside of a pants pocket. Clouds made moon shadows dance in our paths. Good eyesight kept us from walking into trees.

Georgette was nervous. I was delighted.

Then we heard loud monkey-like calls.

Georgette deserted me at the speed of a NASCAR winner.

The calls were made by barred owls. They have a distinctive hooting described as “Who cooks for you? Who cooks for you-all?” During courtship, pairs perform a riotous duet of cackles, hoots, caws, gurgles and maniacal laughter. Females have a slightly higher-pitched call. Owlets make hissing sounds. Calling occurs all year, most frequently prior to egg laying and in late summer and fall, corresponding to the dispersal of young. Bill snapping accompanies aggressive interactions.

Georgette ran home and went in the door instead of shimmying up the drainpipe. She told my mother of her frightening experience. By the time I’d climbed into the bedroom window, my mother was waiting for me.

I told Georgette that barred owls would do her no harm. The thing she needed to fear in the woods was the mosquito.

Our songbirds need to fear accipiters.

“I heard you talk about scatter hoarding on your radio show. What is that?” Scatter hoarding has nothing to do with collecting rugs. There are two kinds of hoarding–larder hoarding and scatter hoarding. Larder-hoarding animals make and defend central food caches or larders. Scatter hoarders have many different food caches. Gray squirrels hide acorns in many places in the hopes that some endure. In contrast, the red squirrel is a larder hoarder. It caches foods in central locations. Red squirrels pilfer from one another. A study found that 25 percent of stored pinecones changed ownership.

Judy Hargrave of Albert Lea asked if she should feed late-staying hummingbirds. The rule of thumb is that if you haven’t seen a hummingbird for two weeks, take the feeder down. The hummingbirds know when to leave. They aren’t in a rush as they are in the spring. Adult males leave first, followed by the females and then the juveniles.

“Why does deer fur change colors?” Deer coats provide thermoregulation and camouflage. Summer coats are thin and reddish to cope with heat stress. In the fall, the coat turns a faded gray or brown with two layers. Outer guard hairs are hollow, stiff and about 2 inches longer than the undercoat. The inner layer is soft and dense, which insulates against the cold weather and snow. Coat color tends to be darker in forested areas and lighter in agricultural areas where deer are exposed to more direct sunlight.

“Mistakes are part of the dues one pays for a full life.”  — Sophia Loren

“All the happiness in the world is between your own two ears.” — John Lennon