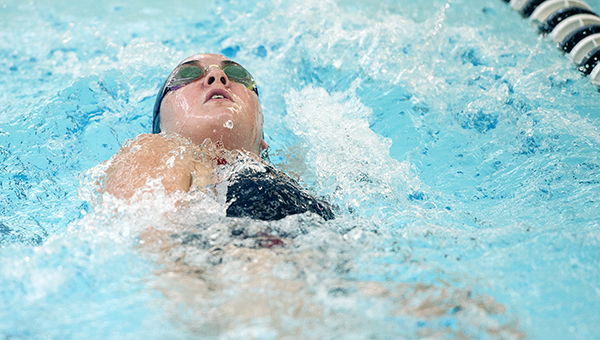 Albert Lea’s Ahnika Jensen swims the backstroke portion of the 200-yard individual medley on Sept. 10 against Faribault at Albert Lea. The Tigers will compete in their final home meet at 6 p.m. Thursday against Mankato East. — Micah Bader/Albert Lea Tribune

The following is a glimpse at how the season has gone so far:

Recap: The Tigers defeated Austin, Winona, Faribault, Red Wing, Northfield and Rochester Century in duals so far this season. During Albert Lea’s 92-88 home win Thursday over Century, Lindsey Horejsi set a pool record in the 50-yard freestyle with a time of 23.86, and the 200 medley relay team of Bailey Sandon, Horejsi, Ahnika Jensen and Anna Andersen set a pool record in 1:50.78.

Remaining meets: The Tigers have three regular-season duals left. They also have the Big Nine Conference meet, Section 1A meet and Class A state meet. Albert Lea’s final home dual will be at 6 p.m. Thursday against Mankato East.

Last year: The Tigers took third place as a team at Class A state meet and produced state champs in four events: the 200 medley relay, 200 individual medley, 50 freestyle and 100 breaststroke.

Recap: Albert Lea’s closest game of the season was Sept. 4 against Worthington (1-6, 1-5 South Central Red) at Jim Gustafson Field. The Tigers led 13-2 at halftime but an interception on the game’s last drive along with giving up two safeties and a blocked punt thwarted the team’s chances. In the other six games, Albert Lea lost by an average score of 42-7. Although the average enrollment of the Tigers opponents was cut in half compared to last season, Albert Lea hasn’t had an easy road. The team faced four opponents that are currently ranked in the Associated Press polls: No. 4 (AAAA) Marshall, No. 10 (AAAA) Waseca , No. 4 (AAA) Tri-City United and No. 10 (AAA) Belle Plaine.

Remaining games: Albert Lea will play its last regular-season game at 7 p.m. at St. Peter (4-3, 3-3 South Central Red). The first round of the Section 1AAAA quarterfinals will be at 7 p.m. Oct. 14.

Recap: The Tigers began the season with four road matches and picked up their first win on Sept. 10 at home during a 3-1 over Austin. Albert Lea’s other conference win was on Sept. 24 against Rochester John Marshall. The Tigers showed progress Saturday at the October Classic in Apple Valley by going 3-1. Albert Lea beat Fillmore Central and Chanhassen and avenged an early-season loss with a sweep of Burnsville. The Tigers are 10th in the 12-team conference and 11th out of 12 teams in the Section 1AAA standings.

Remaining games: A home match against Mankato West at 7 p.m. Thursday is the last match for the Tigers at Albert Lea. The Tigers have three other individual matches this season along with a tournament Friday at St. Michael-Albertville.

Recap: Defense has been strong for Albert Lea. Through 14 games, the Tigers have only allowed more than one goal four times. Albert Lea has conference wins over Mankato East, Faribault, Rochester Century and Mankato West, a team that is No. 8 in Minnesota-Scores.net’s Quality Results Formula rankings and the front-runner for the top seed in Section 2A. The Tigers have a No. 43 QRF ranking. Albert Lea is sixth in the 12-team conference standings and sixth out of 13 teams in Section 2A.

Remaining games: The Tigers have two regular-season games left. Albert Lea will host Austin at 7 p.m. Tuesday and will play at 7 p.m. Thursday at Winona. The Section 2A tournament is set to begin next Monday.

Recap: The Tigers began the season with four consecutive losses but rebounded on Sept. 14 with a 5-2 home win over Stewartville. From Sept. 14 to 22, Albert Lea went 3-1-1. In addition to the win over Stewartville, the Tigers shut out Red Wing — a team that came into the game with a 5-2-1 record — and Faribault. Albert Lea has a QRF ranking of No. 59 and is seventh out of 15 teams in the Section 2A standings. In the conference standings, the Tigers are 10th out of 12 teams.

Remaining games: Albert Lea has two regular-season games left. The Tigers will play at 7 p.m. Tuesday at Austin and will host Winona at 7 p.m. Thursday. The Section 2A tournament starts Oct. 13.

Recap: After going winless last season, the Tigers found success with three wins through 14 matches this year. Albert Lea’s first win was Aug. 25 against Austin. The Tigers edged Faribault 4-3 on Sept. 10 and split a triangular with Marshall and New Ulm on Sept. 26. Albert Lea beat New Ulm 5-2 with wins by Mercedes Saltou at No. 1 singles, Alexa Drescher at No. 3 singles, Sara Kabrud and Sam Skarstad at No. 1 doubles, Lexus Saltou and Kaedyn Kirchner at No. 2 doubles and Katie Boettcher and Maddie Willey at No. 3 doubles.

Recap: Senior Jackson Goodell and his brother, sophomore Carson Goodell, have been a 1-2 punch for Albert Lea’s boys’ team. The duo led the Tigers Thursday to their best team finish — third place — at the Jim Flim Invitational in Winona since the team started competing at the meet 19 years ago. Quinn Petersen and Grace Chalmers have been leading the girls’ team.

Remaining meets: Albert Lea has the Big Nine Conference meet and two other regular-season meets left this season. Next, the Tigers will compete at Owatonna at 4 p.m. Thursday.