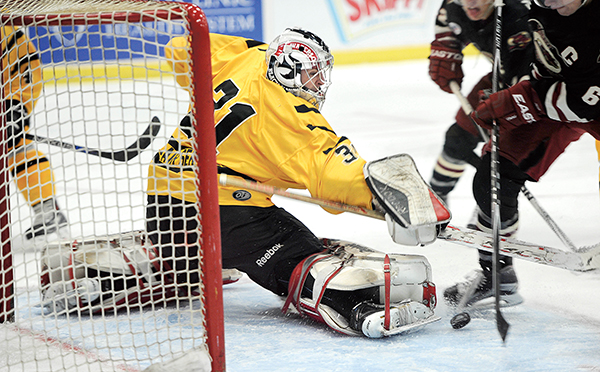 The Austin Bruins went down the wire with the first place team in the NAHL Central, but they couldn’t finish things off as they lost 3-2 in overtime to Minot in Riverside Arena Friday. 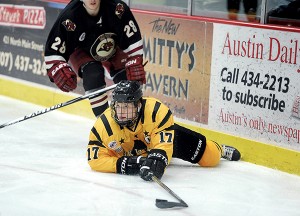 Austin’s Jade Miller looks for an outlet after hitting the ice in the second period against Minot Friday night at Riverside Arena. – Eric Johnson/Albert Lea Tribune

Minot (7-1-2 overall) scored one minute into the overtime period to win the game when James LaDouce got free and found the back of the net. The NAHL is playing overtimes with a three-on-three set-up this season and the Bruins had just one possession in the extra session.

“If you take a chance, you’re going to give up a chance and it comes down to skill and goaltending,” Austin head coach Kyle Grabowski said.

Austin (5-5-1 overall) took a 2-1 lead when Dawson DiPietro scored a put-back goal with 8:30 left in the third period and the Bruins looked to be headed for a victory. However, Minot pulled its goalie with 1:45 left in the game and Tyler Jeanson connected on a long range slap shot with 1:19 left in regulation to force the OT.

The Bruins have lost three straight, but two of those losses were by just one goal.

“We’re learning how to win. We made a comeback tonight and we’ve got to learn how to defend a lead. We’re getting better every time we get out on the ice,” Grabowski said. “I don’t think we can be results focused right now. We just have to do what it takes to get better every day and we have to keep building.”

Austin took a 1-0 lead in the second period when Austin Rueschhoff scored a power play goal on a nice feed from Zach Kennedy, but Minot tied the game just 56 seconds later when Johhny Walker scored a goal.

Kristofer Carlson had 21 saves for Austin.