He was born March 12, 1929, to Sanford and Esther (Sorensen) Sorenson in Albert Lea. 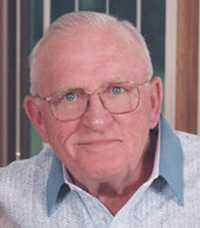 He married his one true love, Joan Lee Jenner, in Marshfield, Wisconsin, on July 26, 1949. He worked with his family, running an A&W Root Beer stand in Wichita Falls, Texas. He returned to Albert Lea in 1959 and worked faithfully for the Chicago Northwestern Railroad until retirement. He was a long-time member and leader of the Elks Club in Albert Lea with many summers spent helping at the Minnesota Elks Youth Camp.

He was preceded in death by his parents; his wife, Joan; his sons Eric and Mark Sorenson; daughters Dale Lynn and Mary Sorenson; and three grandsons, Paul Marable, Christopher Marable and Jameson Beighley.

Survivors include three daughters, Sandra (John) Bertzyk of Ramsey, Pamela (David) Marable of Levittown, Pennsylvania, and Martha Beighley of Albert Lea; and one daughter-in-law, Kate Sorenson, of Plymouth. He was loved by nine grandchildren, many great-grandchildren and great-great-grandchildren. Dale is also survived by his two brothers, Paul (Jan) Sorenson of Wichita Falls and Gene Sorenson of Burleson, Texas. Also sharing in fond memories of Dale are extended family and friends.

The memorial will be at 2 p.m. Wednesday in the chapel of First Lutheran Church in Albert Lea. The interment will follow at Graceland Cemetery. The Rev. John Holt will officiate. Dale and his family attended and were baptized and confirmed in that church. It was also where all three of his daughters were married. It was his wish for his life to be celebrated there. Memorials may be sent to First Lutheran Church,  301 W. Clark St., Albert Lea, MN 56007.