What is the difference between the combs of wasps and bees? 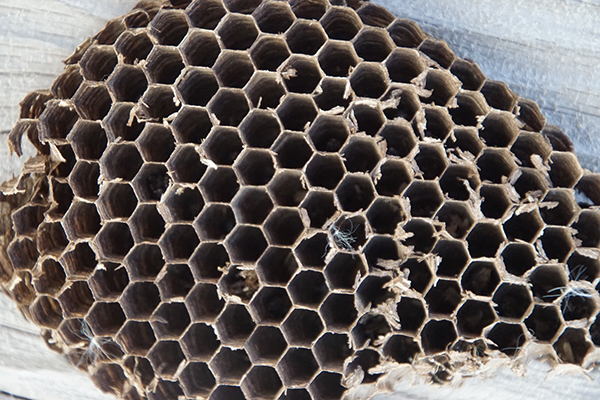 The view inside a honeycomb structure. – Al Batt/Albert Lea Tribune

“Everything is nearly copacetic. I’m trying to do a better job managing the business aspects of my life. I should stop and think before acting, but I’m afraid that if I do, I may not start thinking again. I worry that I’m becoming my father. Pop keeps his money in his shoes. The taller he is, the better off he is. I’ve been after him to get some hearing aids. He’s not as deaf as a post, but he’s well on his way. He claims hearing aids are too expensive and he needs to wait until he has paid off the doctor who delivered me. He doesn’t listen to me for two reasons — he doesn’t want to and he can’t hear me. Yesterday, I noticed a wire hanging out of his shirt pocket. I thought he’d taken my advice until I discovered that his hearing aid was actually an earphone from an ancient transistor radio. At least it helps him hear better.”

“How can that help his hearing?” I ask.

“People see it and they talk louder.”

A friend and I were standing by a spotting scope near Pea Island National Wildlife Refuge in the Outer Banks of North Carolina. We’d been looking at gannets and were standing in the sand while scoping for jaegers. We were searching for a bird that might not be there. That’s not a sign of insanity, but we’d passed many of those signs earlier. Before long, a fellow climbed up the dunes to join us. In some of the beach areas where vehicular traffic was allowed, drivers let air out of the tires of four-wheel-drive vehicles, reducing the psi from 35 to 20, so they’d be able to drive through the sand. This gentleman nearly got stuck in the sand while on foot. He asked, “What are you looking at?”

We told him. We were looking at birds and invited him to have a look. He peered through the spotting scope — for a long time. Just as Blanche Dubois in “A Streetcar Named Desire,” he depended upon the kindness of strangers. He’d just given up the scope, when we spotted a parasitic jaeger chasing a gull over the waves. Jaegers are fast-flying seabirds that obtain food by pursuing gulls and terns, forcing them to drop their food.

The stranger had another even longer look through the spotting scope.

Later, I saw a number of bald eagles at a catfish farm. Easy pickings for the eagles. I spotted a black bear eating field corn at the Alligator River National Wildlife Refuge.

I watched as a group of starlings encountered a Cooper’s hawk. The flock formed into a ball, its way of circling the wagons. The raptor didn’t take a chance of being injured by heading deep into the flock. It followed the flock until one bird panicked and left the safety of numbers. The last I saw, the starling was fleeing while the accipiter was in hot pursuit.

Neal Batt of Hartland gave me a couple of paper combs, wondering if wasp or bee made them. Wasps build single horizontal paper combs. Honeybees build back-to-back vertical wax combs. They both make hexagon-shaped cells. This hexagon design is known as the honeycomb structure. Ancient Greek scholars thought bees possessed geometrical forethought in building the most efficient enclosure to hold honey. A University of Michigan mathematician offered “the honeycomb maintains that a hexagon is the best way to divide a surface into equal areas with the least perimeter.

In the 1940s, the Idaho Department of Fish & Game was dealing with an overpopulation of beavers in parts of the state when wildlife managers settled on a novel idea. They captured beavers, packed them into boxes, attached parachutes, and dropped them from an airplane into the Frank Church River of No Return Wilderness. A film made around 1950 shows the infamous beaver drops.

The last monarch butterfly was in my yard on October 11. It had no parachute.

“My father said that when snowbirds arrived, we’d have real snow in six weeks. Are the bird’s predictions accurate?” They are if your father told you they were. No weather forecast is infallible. If you get trackable snow before the snowbird predicted it, that means the dark-eyed junco was there earlier and you failed to see it.

“I had a bloom on my lilac this fall. How can that be?” It’s called recurrent bloom or repeated flowering. There aren’t as many blossoms as during the first bloom of the year.

“How big are turkey vultures?” They weigh around 4 pounds and have a wingspan that averages nearly 6 feet. They have an amazing ability to eat dead things. Anthrax and rabies, no problem. They have highly acidic gastric juices, gut bacteria that act as a defense, and a strong immune system that makes them resistant to botulism.

If the geese on St. Martin’s Day (November 11) stand on ice, they will walk in mud at Christmas. — weather folklore

“The more I see, the less I know for sure.” — John Lennon

“Teaching children about the natural world should be seen as one of the most important events in their lives.” — Thomas Berry