Why do pelicans fly so high? When do bald eagles lay eggs in Minn.? 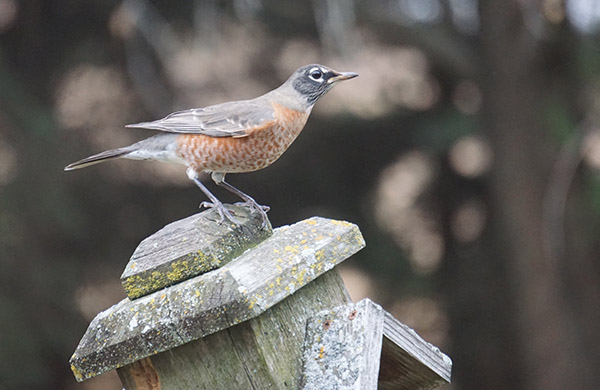 A robin from this year’s graduating class looks ahead to the future. – Al Batt/Albert Lea Tribune

“Everything is nearly copacetic. I need to have some plumbing work done. It might be cheaper to just buy a new home with new plumbing. I hired Drippy. After I shook the plumber’s hand, I counted my fingers. I fell off another diet, but it’s not my fault.”

“That’s what you say every time,” I say.

I miss the lively music of toads and crickets. Cold weather lessens both their numbers and the vitality of their songs.

A squirrel jumped into a pile of raked leaves.

It was rustling leaves. Rustling leaves was a hanging offense back in the Wild West. Where was Hanging Judge Roy Bean when I needed him? The squirrel emerged with a mouthful of leaves. The laid-off leaves would provide colorful insulation for the bushytail’s nest.

Blue jays called. They often do so in alarm, but I think the clever birds use their calls as LOL.

I regularly see a squirrel bury an acorn, only to have a jay fly down and steal it. LOL.

They have quite a bite for something that isn’t there

Something bites and you don’t see anything. You look harder and finally see the culprit, not much bigger than a flake of pepper. They’re called minute pirate bugs. They are about 1/5 of an inch long, oval to triangular in shape, somewhat flattened and black with whitish markings on the back. They are beneficial, feeding on small insects and insect eggs. They are important predators of corn earworm eggs in corn fields. The tiny insects go unnoticed most of the year, but in the late summer and fall, they move out of the areas where they have been feeding and bite us with an impact that is far out of proportion to their size. Insect repellants don’t work well. They don’t feed on blood or inject venom or saliva.

Craig Rayman of Glenville asked why some pelicans fly so high. Scan the skies and you might see flocks of these birds soaring high. They travel long distances while soaring. When flying, their wingbeats are slow and methodical. They circle higher and higher on thermals, until they can commence soaring. This allows them to travel with little or no flapping. It makes migration easier.

“When do bald eagle lay eggs in Minnesota?” It varies from the first week of March in southern Minnesota to late March in northern Minnesota. Bald eagles typically lay two to three eggs and incubate them for 33 to 35 days. The eggs

hatch in the order they were laid as the parents begin incubation as soon as the first egg was laid. This means that eaglets are a few days apart in age.

“Where do pelicans spend the winter?” American white pelicans leave Minnesota each fall as lakes and rivers freeze. They winter along the Gulf Coast from Florida to Mexico. They return to Minnesota in early spring as lakes and rivers thaw. These pelicans were nearly driven to extinction in the early 20th century by human pressures. There were no reports of nesting pelicans in Minnesota from 1878 until 1968. A recent survey estimated that 22,000 pairs nest at 16 sites on seven lakes across the state.

“Why are men often called old coots?” That’s a great question. It’s an outrage that we should be called anything other than handsome, smart, sweet, and for dinner. I’m not sure why we’re called old coots, but the bird, the American coot, is also called a mudhen. There is a minor league baseball team in Toledo called the Toledo Mudhens. They were the favorite of Corporal Klinger on MASH. I watched the Mudhens play once. It was most enjoyable. Some of the veterans were a bit long in the tooth, but I wouldn’t call them old coots. I’d call them old Mudhens. With the meaning “fool,” usually but not necessarily old, coot had its first written citation in 1766. There is no fool like an old fool, but every man shows promise. A coot is dark-gray water bird resembling a duck. Their actions can appear silly at times, but I’m sure that coots find it offensive when they hear someone calling foolish men old coots.

Thanks for dropping by

“Friends are those rare people who ask how we are, and then wait to hear the answer.” — Ed Cunningham

“Teaching children about the natural world should be treated as one of the most important events in their lives.” — Thomas Berry