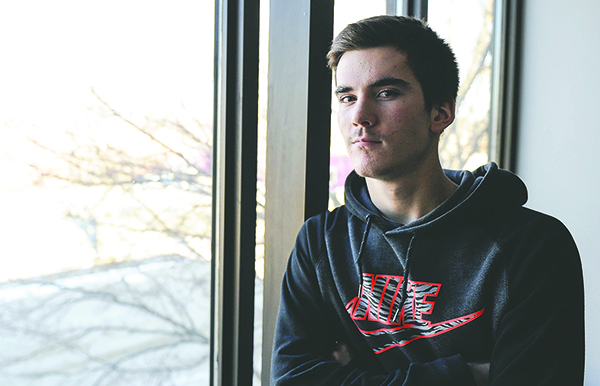 AUSTIN —Jacob Biwer is no stranger to offering a helping hand when he thinks he sees a kid being bullied at the skate park in Austin, and now he’s hoping to have a much bigger impact in the battle against bullying.

Biwer, who has competed all across the the Midwest in BMX riding, would like to leave a lasting impact against bullying. When he was younger, Biwer heard about a kid who was beaten up by six other kids after getting off a school bus and that story has stuck with Biwer ever since he heard about it.

Biwer is now hoping to be able to share his anti bullying campaign on “The Ellen Degeneres Show” as he and some of his friends have sent in tapes and letters on why he’d like to speak against bullying on the national stage.

“I want to just keep motivating people and show them they can keep going forward and do what they love,” Biwer said. “I just really want to better the world. I’ve seen a lot of kids get bullied. I tell them to ignore it and use it to make them stronger.”

Biwer used to be shy when it came to public speaking, but ever since he taught a BMX class at the YMCA, he’s become a lot more vocal in front of groups. Biwer feels he’s ready to take the next step and share his views with as big of an audience as he can find.

He said he would love to get on “The Ellen Degeneres Show” to share his view.

“I really hope that it’ll work out,” Biwer said. “I’ve always wanted to be on a show and I’ve always watched her show. She’s very inspirational and I really like her a lot.”

Biwer said a great way to get noticed for his anti bullying cause would be to put together a big trick, but he’s not sure what he would do yet.

“I’m trying to come up with a big stunt. It’s kind of hard to think of something that will kind of pop out,” Biwer said.

As Biwer tries to come up with big ways to stop bullying, he’ll still continue to do the small things. Mostly, he’ll look out for kids who may not be getting treated fairly.

“If I see (bullying) happening at the skate park or anywhere I try to stop it right away,” Biwer said.