Bald eagles have over 7,000 feathers; poem speaks to bird lovers 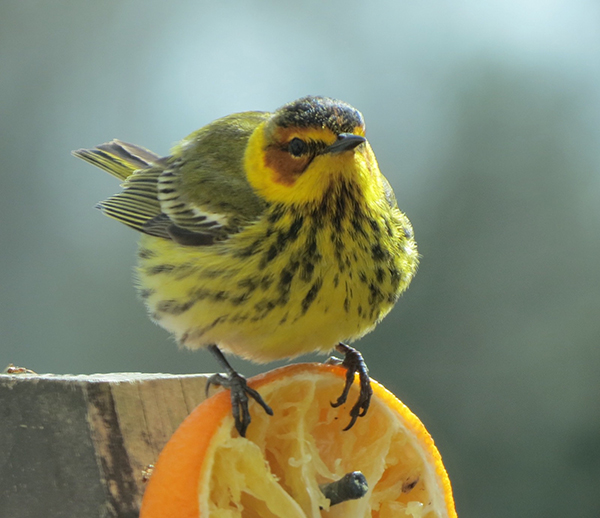 In remembrance of springs past, a photo of a Cape May warbler taken by Wanda Kothlow of Wells. – Provided

“Everything is nearly copacetic. Farm commodity prices go up and down, but they seem to spend more time going down than up. That’s known as the tough-hop rule. I’m fortunate that I’m an investment genius. I bought a roll of those forever stamps. Thanks to that, I’m living on easy street. I have more stick-to-itivness than chewing gum on a dance floor. Maybe I get it from Pop. He never stops telling the same old stories. Pop has been telling everybody about how he walked barefooted across hot coals when he was young. He never lets the truth get in the way of a good story. He didn’t really walk over hot coals. It was close, I suppose. He walked across a bed of hot peppers. He should walk a bit more now. Flossing is the only exercise he gets. Oh, I have my Christmas shopping done.”

“Why would I lie? Everybody on my Christmas list is going to get Girl Scout cookies this year.”

“Because I have trouble saying ‘No.’”

The weather was nice until it wasn’t.

It was a gray sky, lacking features. Rain had been predicted. There was a trough aloft. The sun almost peeked out from the clouds. I thought it would, but the weather played me for a sucker. Rain and snow merged.

I weaved my day around a tapestry of nature.

Great horned owls had hooted the night away. A kestrel perched. It was hunting. The tiny falcon was a bird on a wire.

Juncos swirled ahead of a car headed down the road. A rooster pheasant walked the graveled roadside, searching for food. He was a parade of one.

I saw deer tracks in the snow. Deer store fat around internal organs and under skin, which provides energy reserves and insulation. A deer’s winter coat is made of coarse, hollow, gray-brown guard hairs covering a dense, wool-like underfur. These provide insulation and heat absorption. Minnesota has scads of deer, but Wisconsin hunters take twice as many as do Minnesota hunters. Minnesota has more land, but Wisconsin has more deer hunters.

Starlings flew overhead in a feathered ball. Their plumages were a glossy black with white feather tips. The birds appeared to wear tiny stars. By spring, the white tips have worn away and starlings become darker birds. Starlings have dark bills in winter that change to yellow as breeding season nears.

There was a stillness to the yard. Blue jays called and house sparrows chirped, but most of the regular soundtrack had gone. The sweet voices of spring and summer had left in a migration.

The loudest voice was that of crows. Ed Ochester, from Pennsylvania, wrote this entitled, “Fall.” “Crows, crows, crows, crows. Then the slow flapaway over the hill and the dead oak is naked.”

Melva Henspeter of Preston recommended a poem by Nicholas Samatas called, “He who is especially fond of birds.” It is lovely. Here is a bit of it. “In a place of solitude, an observant man can hear a busy silence. His Arcadian hands lift the window onto a flannel sky, an edging of shaggy pines whose green wavering suggests silver. He looks below the comb of the trees and smiles at the tiny ibis—scorchingly white—that moves forward so slowly, there is no sound. Above in waning

light, black-tipped terns smudge the sky. A high kestrel eddies on the wind and, like this, the last hours go. By the window, he listens for the unseen aviaries that continue to warble and skirl through the dusk. What else is needed?”

This is from Dave Keyes of Northfield, “An idea has been percolating in my mind for some time now that burst, like a abscess from my brain this morning while watching some chickadees. Given your unusual way of observing the world, I feel compelled to share it with you. Suppose it started while reading the paper about UND adopting the moniker ‘Fighting Hawks’ for their athletic teams, and that according to Patrick Reusse, they’d been known as the Flickertails in earlier days. While thinking about what a cool name that was (or simply the Flickers), the abscess burst. What about the “Fighting Chickadees”?! Now, before you scoff, think about this. Imagine yourself some winter night in the Chickadee’s high school gym (nest?). Their basketball team leads by one, five seconds to play. Opponent launches a shot that will beat the Chickadees, misses but is fouled. Two shots, one to tie and two to win. The opponent goes to the foul line. As he is about to shoot, the packed house of a thousand Chickadee partisans begins their trademark chant, “Dee-Dee-Dee-Dee-Dee.”  Thoroughly unnerved, both shots are badly missed and the Chickadees win! Hope this gave you a chuckle. If so, it is a very small repayment for the many times you have made me laugh.”

“For most of the wild things on Earth, the future must depend upon the conscience of mankind.” — Archie Carr

“Heaven goes by favor. If it went by merit, you would stay out and your dog would go in.” — Mark Twain