Funeral services for Louise Medd, 93, of Hollandale will be at 1:30 p.m. Thursday at Hollandale Reformed Church. The Rev. Neal Ooms will officiate. Interment will be at Hollandale Cemetery.  Visitation will be one hour prior to the service at the church. Online condolences are welcome at www.bayviewfuneral.com. 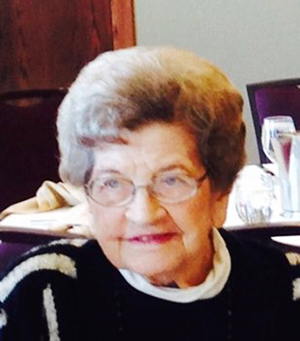 Louise was born Jan. 31, 1922, in Pease to John and Jane Nyenhuis. She was married to Robert Medd on March 21, 1945, and they lived on their farm in Hollandale for the entire 70 years of their marriage. During World War II, Louise worked in a munitions factory. Except for many years of seasonal work at Paul D. Jones and several summers supervising crews of teenage girls blocking and weeding beets, Louise was primarily a full-time mother and homemaker. She was an active member of Hollandale Reformed Church, serving as a Sunday school teacher, circle member, quilter and greeter. She was especially appreciated in the community for her home-baked cinnamon bread, which she regularly delivered for birthdays, anniversaries and to the sick and shut-ins. Family members never left her home without a loaf of her delicious cinnamon bread.

Louise will be remembered in the hearts of many for her unconditional love and acceptance, for her generous hospitality, for the delicious meals and baked goods she served and for the warm and inviting atmosphere she created for countless gatherings of family and friends.

In lieu of flowers, memorials are preferred to Hollandale Reformed Church, Gideon’s International or SEND International.