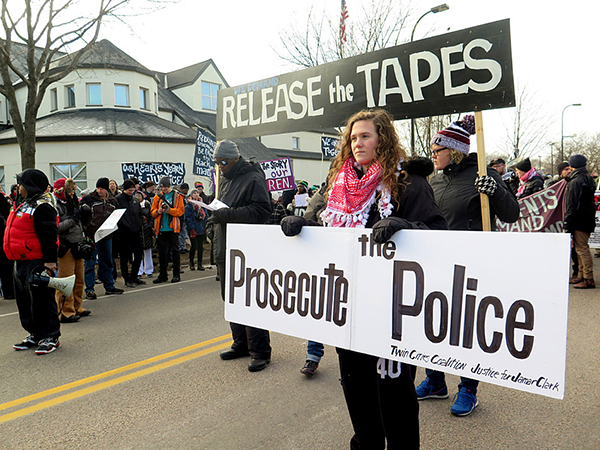 About 300 protesters marched from the north side of Minneapolis to the city’s downtown Saturday afternoon, protesting the fatal police shooting of Jamar Clark last month.

The shooting prompted an 18-day protest and encampment outside the Minneapolis Police Department’s 4th Precinct in Minneapolis. The encampment was cleared out by police on Dec. 3.

“Our primary demand is prosecution of the police — and we don’t want a grand jury,” Reeves said. “We want (Hennepin County Attorney) Mike Freeman to do like he does to a lot of young people in our neighborhood, to indict the police for whatever he wants to charge — manslaughter, second degree murder. They clearly committed a crime and we want to see them indicted for it.”

Police blocked traffic for Saturday’s march, which wound through downtown, making several stops where speakers stood on the back of a truck and addressed the crowd.

Black Lives Matter Minneapolis announced plans to demonstrate at the Mall of America on Wednesday. The group did the same thing last year, when around 1,500 protesters showed up and two dozen were arrested.