The trumpeter swans triumphant return from the brink of extinction 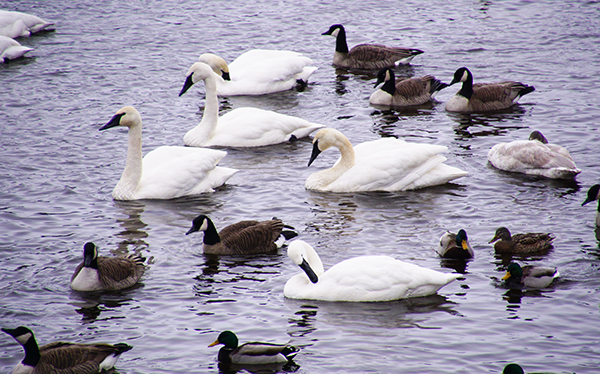 “Everything is nearly copacetic. I saw Still Bill walking down the street with a beautiful woman on each arm.”

“That doesn’t sound like Still Bill, he makes more dust than miles,” I say.

“I know. I’ll bet those tattoos weren’t cheap. My sister Cruella wanted me to go shopping with her. I refused. When she goes shopping, stores line up for blocks. She goes shopping whenever Pop starts talking about his army days. His stories are paved with potholes. If Pop were hooked up to a lie detector, the needle wouldn’t just move — it’d knit a sweater. Pop forgets that we know that he spent most of his service on KP. He tries to convince us that KP was an island in the Pacific. It was an island surrounded by dishwater. I didn’t want to be constantly tempted by all the candy I got for Christmas, so I ate it all. I ate too much. I couldn’t even fall asleep in my chair of great comfort. I did what I do whenever I have trouble sleeping. I went to hear a farm economist babble incoherently. It was a great talk. I only woke up a couple of times.”

A downy woodpecker fed upon suet caged in a hanging feeder. Bits of suet dropped to the ground. Or attempted to drop to the ground. Most of the suet never touched soil. A starling standing below the feeder watched intently as the woodpecker worked. Each time a piece of suet was dislodged, the starling jumped and fluttered upwards, snatching the treat out of the air.

An American kestrel hunted from a utility wire. It was a male identified by the blue of the wings. This tiny falcon sometimes bobs its head to determine the location of prey. Studies have shown that a kestrel can make up to 17 capture attempts per hour.

Canada geese flew over. They take the cold well because they are wearing down-filled coats. A friend, Dale Peterson of Albert Lea, showed me a photo of a great number of Canada geese on his lawn. The geese were providing a lawn service. They mowed the lawn and fertilized the grass.

My wife and I visited the Swan Park in Monticello, . The waters of the Mississippi River are open there thanks to the Monticello Nuclear Power Plant not far upstream. This attracted trumpeter swans. The bugling of the swans was music to the ears of Sheila Lawrence. Sheila hauled shelled corn to her sloping residential backyard bordering the riverbanks. The swans, weighing 21 to 35 pounds each, ate a lot of corn. Sometimes there were over 2,000 swans feeding on the 1,500 to 2,000 pounds of corn offered daily. Sheila began feeding them in 1988 and continued until her death in 2011. Her husband Jim carries on his wife’s legacy.

By the late 1880s, trumpeter swans were believed to have become extinct due to market hunting, use of their feathers for hats and writing quills, and the harvesting of their eggs. In 1919, nests were found in Yellowstone National Park. In 1935, there were only 69 swans existing in the Lower 48. Swan restoration began in Minnesota in 1966.

If you’re coming from Minneapolis, take Monticello exit 194 off I-94. Take a right onto County Road 18 and continue for about half a mile to Mississippi Drive and turn left. Drive until you see a small park on the right near the end of Mississippi Drive. Viewing season runs from December through March.

My stocking was stuffed

I’m not a gifted shopper, but I give stocking stuffers every Christmas. I even get the occasional stocking stuffer. This year, I got a nifty blanket so that I’ll always have a nice place to plop down at picnics, in parks or at ballgames without getting dirty. The Matador Pocket Blanket is a swell gift for the outdoor enthusiast. It can be neatly folded into the size of a wallet and is made of lightweight, revolutionary parachute material that is both water- and puncture-resistant. For more information, go to www.matadorup.com.

“Why do woodpeckers hammer on my house?” There are three primary reasons. They are searching for insects for food. Woodpeckers use their bills like chisels and their tongues like spears to grab grub. They could be creating cavities for nesting and shelter. Or drumming as a means of communication, with different drumming used for alarms, territorial declarations or to attract a mate. If a resonant surface is used, the sound can be heard over long distances. Woodpeckers are protected under the North American Migratory Bird Act.

“Tree swallows nested in a bluebird box on our property, but the swallows left early. Where did they go?” Male tree swallows are blue-green above and white below, the females are duller in color. They raise one brood per year before gathering in large flocks (usually near water) to prepare for migration. They winter primarily in Florida and Central America, farther north than other American swallows and return to

their nesting grounds before other swallows. They eat berries and seeds as well as insects, which helps them survive the spring cold snaps. They are capable of foraging on the ground.

There were 38 species of birds recorded on the Christmas Bird Count held on January 1. This number is down from recent years. I spotted a single white-throated sparrow and a common redpoll. I saw a great horned owl and a sharp-shinned hawk outside the count circle. Thanks to all who counted.

“He who would climb to a lofty height must do so by steps, not leaps.” — Pope St. Gregory the Great