What was the lowest temperature ever recorded in Minnesota? 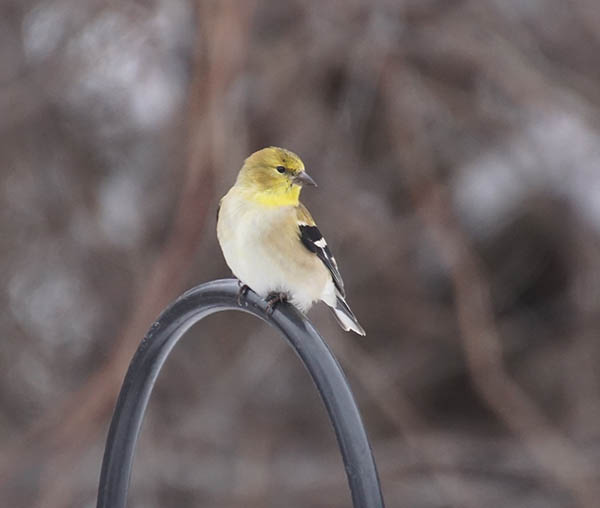 “Everything is nearly copacetic. I had a bull mouse in the house. I trapped him, but nearly lost a finger in the process. I didn’t want to visit the hospital again. When I was a boy, I had an operation. They talked to Pop about anesthesia. He asked what that was. The doctor explained, ‘After your boy gets it, he won’t know a thing.’ Pop said to forget the anesthesia because ‘He don’t know nothing now.’ My old refrigerator is a goner. I’m emptying it by eating everything before its expiration date. I got one of those big bags of mixed nuts for the holidays —pecans, almonds, peanuts, walnuts and donuts, so I’m eating healthy. Pop is my inspiration. I’m trying not to be him when I grow up. Pop wears a sweatshirt as a scrapbook of the foods he’s eaten in the past week. I’m trying to shed some pounds. Remember when I jogged?”

“I’m going to lose weight by a simple exercise. Whenever anyone offers me a snack, I’ll continue moving my head to the right and then to the left until the offer is rescinded.”

I hugged a tree.

Studies have shown that people who keep company with trees are more satisfied with their lives. A tree is a calming influence. Trees make us happy.

“Do all birds have gizzards?” The gizzard is the muscular part of a bird’s stomach. When a bird eats, the food goes from the throat to the esophagus. Some species have an expanded, thin-walled pouch in the esophagus called the crop where food is stored before it’s sent to the stomach. All birds have two parts to their stomachs. The first is called the proventriculus or glandular stomach, where digestive enzymes are secreted to begin the digestion process. It’s similar to a human stomach. The second part is the gizzard. The gizzard is thick and muscular in some species, such as ducks, turkeys, chickens and grouse. These birds pick up grit that collects in the gizzard. That’s grit, not grits. Grit can be small stones, sand, etc. When food enters the gizzard, the grit helps pulverize it. All birds have a gizzard, but those that eat easily digested foods may have small, thin-walled gizzards.

“Do birds have teeth?” A few species look as if they do, but they’re actually toothlike notches on their mandibles. They aren’t used to chew food. A developing chick inside an egg may have an egg tooth, a sharp projection on its upper bill. It’s not a true tooth. The chick uses the egg tooth to help break out of the egg. The egg tooth disappears in time.

“You mentioned gallinaceous birds on the radio. What are they?” Gallinaceous birds are heavy-bodied, ground-feeding birds, including chicken, grouse, ptarmigan, turkey, pheasant, quail, partridge, jungle fowl and chachalaca — all in the order Galliformes. They are mainly non-migratory birds.

“How do robins find worms?” By sight. A robin cocks its head to one side, using its eye to look for worms.

“Are bats blind?” Bats have a well-developed eyesight, but they use echolocation to navigate and to find prey at night. They produce high-pitched sounds and listen to the sounds bouncing back, to determine the location of objects.

“How do animals survive our winters?” If you’re going to live here, you need a good plan. If you don’t have one, go to a window, because it’s curtains for you. If you stay here, you’d better be active, hibernate or go into torpor. You could migrate to that mysterious place called, “south.” You could avoid coming here at all or you could perish in the fall. It’s not a jungle out there, it’s much too cold.

The GBBC is a free, fun, and easy event that engages bird watchers of all ages. Participants are asked to count birds for as little as 15 minutes during the four-day event and report the sightings online at birdcount.org. More than 140,000 participants submitted their bird observations last year, creating the largest snapshot of global bird populations ever recorded. The 19th annual GBBC will be Feb. 12 through Feb. 15.

The International Festival of Owls

The 14th Annual International Festival of Owls takes place on March 4 through March 6 in Houston, Minnesota. The Illinois Raptor Center will be presenting live owl programs and plans on bringing 11 birds of six different species. There will be numerous speakers and programs.

“Learning too soon our limitations, we never learn our powers.” — Mignon McLaughlin

“It is better to walk alone than with a crowd going in the wrong direction.” — Diane Grant