Do owls prey on rabbits? Are there any black foxes in Minnesota? 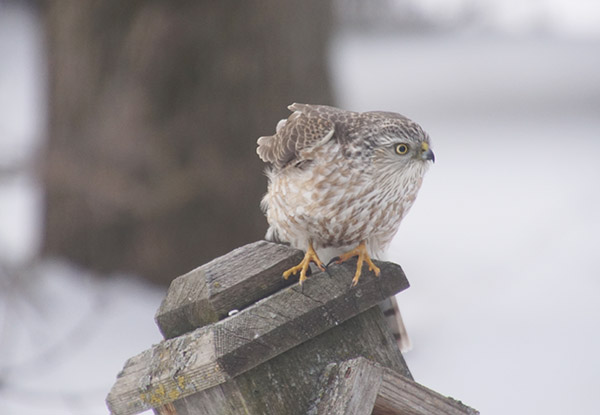 A sharp-shinned hawk looks cute to some, but not to a songbird. – Al Batt/Albert Lea Tribune

“Everything is nearly copacetic. I was born with nothing and still have most of it. Some people say that I think only of myself.”

“How does that make you feel?” I say.

“It makes me think they should think only of me. Telling someone that is as useful as a pocket on the back of a shirt. I like to wear just enough clothes to stay warm in the winter and to keep from being arrested in the summer. The problem was that my duds had some age on them. That’s why I looked like an unmade bed. I went shopping and bought clothing. I couldn’t see my checkbook for tears. The trouble with becoming a slick dresser is that I might have to get a vehicle to match my dress. My primary ride carries a bumper sticker that reads, ‘Honk if anything falls off.’ Pop had a scare yesterday. He got into Ma’s car and, heavens to Murgatroyd, he found that someone had stolen the steering wheel, the radio, the brake pedal and the foot feed.”

“No worries. He had gotten into the backseat by mistake.”

I saw a rough-legged hawk. As a boy, I called it a Christmas hawk. Similar in size to a red-tailed hawk, it has much smaller feet, allowing the rough-legged to perch on thinner branches than the red-tailed, often called a “tail” by hawk counters.

A northern shrike perched high on a small tree at the edge of a field. A shrike is grey on the head and back, white on the chest and throat, with black patches on wings and tail, and a black mask across the eyes. The shrike is a predatory songbird. Unlike hawks and owls, it doesn’t kill with its talons, but with its sharp beak. It hunts from an exposed perch, darting out swiftly after prey that may be forced to the ground by the shrike’s feet. Prey is sometimes impaled on a thorn to be eaten later. The shrike’s appearance resembles that of a mockingbird.

Harper Lee, author of “To Kill a Mockingbird,” had just died. That book convinced many readers to become lawyers. A beloved character in that book is Atticus Finch. I don’t recall ever encountering a birder named Atticus. That surprises me.

Dan Richards of Geneva wrote, “I have watched this big cottontail at the bird feeder for many days now. I found his corpse below the feeder without a head! Do great horned owls dine on rabbit heads? The body of the rabbit was untouched.” Do you know if the rabbit had made any enemies? I think we could rule out rabbit zombies in search of bunny brains, sharks and Bigfoot. There are other possibilities–weasel, mink, cats, etc., but a great horned owl is skilled at decapitating prey. It’s a jungle out there.

“Are there black foxes in Minnesota?” The red fox has a rusty-red coat, white-tipped bushy tail and black legs, ears and nose, but there are color variations including black, silver-black and red bisected by dark bands across the back and shoulders (called a cross fox). It eats rodents, rabbits, birds, snakes, fish, insects, berries, nuts, and seeds. A fox hides food to be eaten later.

“Do squirrels ever fall out of trees?” Beware of falling squirrels. A helmet is a good idea, no matter what you’re doing. A falling squirrel is usually a baby either orphaned or from a broken home (malfunctioning nest). A falling adult is likely ill or injured, but a misstep is possible. I recall seeing a squirrel fall from a tree as I exited a church in Algona, Iowa. It hit the ground with a thud and scampered up another tree. When bucked from a horse, you climb back into the saddle. Perhaps the squirrel was a thrill seeker.

“How many miles a day does a hummingbird fly during migration?” Scientists say that ruby-throated hummingbirds average 20 to 25 miles per day.

“What’s the best way to help a snapping turtle cross the road?” Be safe and watch for traffic with every eye available. Snappers and softshells are aggressive and quick. Long necks enable them to reach around and bite if picked up by the sides of the shell. Never pick a snapping turtle up by the tail as this could injure its spinal cord. Grabbing a turtle by a rear leg while supporting it from below with the other hand is safe. Sticks, handles, shovels or similar items could prod turtles from behind or when bitten, could be used to drag turtles across roads.

“When does a bald eagle’s head and tail turn white?” Mature plumage is acquired through annual molts, a gradual change to the iconic plumage of white head and tail. The beak turns from black to yellow, the eyes from brown to yellow, body feathers from mottled to dark brown, and head and tail feathers from mottled to solid white. Each successive molt comes closer to adult plumage. Most birds attain the classic adult pattern at about five years. Some maintain residual brown for longer or never entirely lose it.

“How many bald eagles live to be adults?” Studies estimate mortality as high as 72 percent within one year of leaving the nest. About 1 in 10 eagles survive to five years.

“A good laugh and a good sleep are the two best cures for anything.” — Irish proverb

“The best time to plant a tree was 20 years ago. The second best time is now.” — Chinese proverb