Is it unusual to see a white-throated sparrow in January in Minn.? 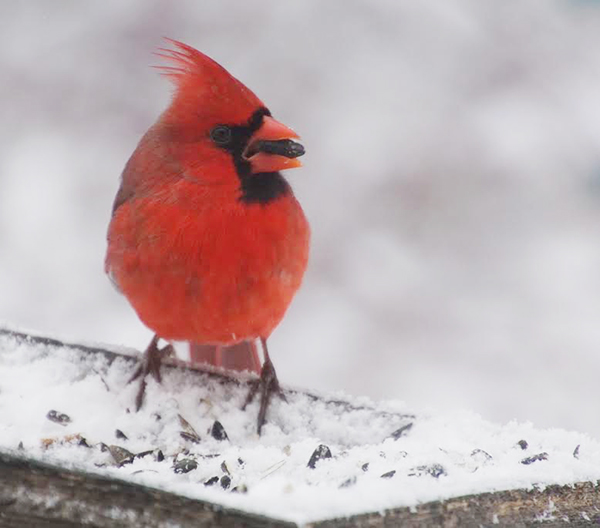 “Everything is nearly copacetic. The first five days after a weekend are the hardest and I know that they make horoscopes so they are useful to everyone, but my horoscope said to avoid being hit by a falling refrigerator door. That was so stupid, I was barely able to jump out of the way. The door of my refrigerator fell off. It must’ve had something to do with the screws I’ve been finding on the floor of the kitchen over the past few weeks. While I tried to duct tape the door back in place, I decided to write a cookbook for single men. It’s going to be called ‘Microwave Until Hot.’ I think Carl Snarl got married again. There is tobacco juice on both side mirrors of his pickup. The wind blew, the snow drifted and Pop got stuck in his drive again. He thought he could get out by shifting from low to reverse and back. He rocked himself to sleep. If Pop ever won the lottery, he’d keep farming until the money ran out and he’d still be driving his old pickup that can’t find its way through a snowflake.”

I try to keep the yard natural.

I recall a boyhood of wandering. I was never alone. Fascination, delight and anticipation were my constant companions. I recall identifying my first American redstart one spring morning.

It was a common, but excellent bird.

One of many excellent birds that I’ve seen on equally excellent mornings.

“I saw a white-throated sparrow on New Year’s Day. Is that unusual?” This lovely sparrow migrates in mid-April to late May and again in mid-August to November. Most breed in Canada, but some breed in Minnesota’s north central and northeastern regions. Most winter in the eastern United States. The sparrow is said to whistle, “Poor Sam Peabody, Peabody, Peabody” or “Oh sweet Canada, Canada, Canada.” In Minnesota, white-throated sparrows sing, “Poor Sven Peterson, Peterson, Peterson.”

“Have you ever seen a butterfly in the winter?” One day during my boyhood, I was carrying the Clarks Grove Creamery butter, left in the barn by the milk truck driver, to the house. I slipped on the ice. I put my hands out to break my fall and both containers of butter went flying. It was below zero and I saw butter fly. The mourning cloak butterfly is usually the first butterfly we see in spring because it spends the winter as an adult in tree holes, under bark or in other shelters, and emerges as soon as temperature allows. It’s purple-black and has a muted yellow wing border with a row of blue dots inside. An unseasonably warm winter day might encourage flight.

“How can I attract house finches?” Leave a Christmas wreath up. House finches commonly nest in wreaths and hanging plants. The ones in my yard chow down with gusto on safflower seeds, but they also enjoy sunflower and nyjer seeds.

Golden Eagle Project Co-coordinator and National Eagle Center Education Director Scott Mehus reported that more than 180 volunteers searched the blufflands for golden eagles on January 16. The 12th annual Wintering Golden Eagle Survey produced a record 147 golden eagles in an area covering 26 counties in five states. Volunteers also spotted 1,509 bald eagles. Unlike bald eagles, golden eagles are typically found away from water where they feed on terrestrial prey such as squirrels, rabbits and wild turkeys. Although they aren’t known to breed in the Upper Midwest, golden eagles are regular winter inhabitants of the region. Information and registration for upcoming golden eagle field trips can be found at www.nationaleaglecenter.org/ golden-eagle-project/golden-eagle-field-trips/. The National Eagle Center in Wabasha is an educational interpretive center whose mission is to foster environmental stewardship and education about North American eagles.

The Bluebird Recovery Program Expo will be held at the Middle School located at 601 4th Street NW in Byron on April 16. Registration begins at 8 a.m. with the program running from 9 a.m. to 4:30 p.m. The International Owl Institute will present live owls and Minnesota Audubon will do a program on red-headed woodpeckers. Other presenters will be Jake Langeslag on using goats to rid property of invasive species, Keith Radel on how to raise more bluebirds, Ray Simon on bat houses and this happy hick from Hartland will yap on this and that. There will be vendors, exhibits and helpful advice. The BBRP’s mission statement reads, “To encourage, inspire, educate and assist individuals and organizations to become actively involved in the restoration and preservation efforts to sustain a healthy and expanding population of bluebirds and native cavity nesters.” For more information on this delightful event, email Jeanie Mortenson at jeanieandcarl@hotmail.com.

Sign up online at feederwatch.org for Project FeederWatch by Feb. 29 for $18 covers this year and next year and those who sign up will receive a free course valued at $29. Participants contribute information on their birding observations and send it to the Cornell Lab of Ornithology to help monitor bird populations.

Line 21 of the Minnesota income tax form, marked by a loon, offers people an opportunity to help nongame wildlife. When taxpayers designate donations to the DNR’s Nongame Wildlife Program, their tax-deductible donations are matched by state conservation license plate funds. These donations help more than 800 species of animals that aren’t hunted–from eagles and loons to turtles and butterflies. The fund receives no money from hunting and fishing license fees or sales taxes.

“Those who gossip with you will gossip about you.” — Edgar Allan Poe