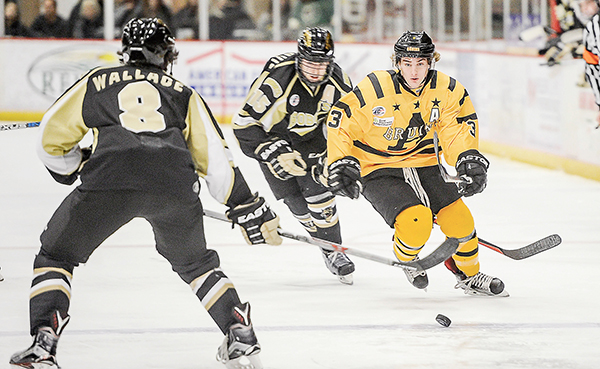 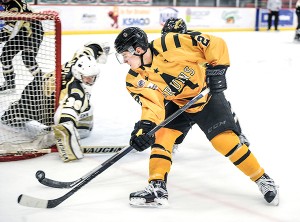 Austin’s Luke Notermann tries to flip the puck back in the net against Bismarck in the second period Friday night at Riverside Arena. – Eric Johnson/Albert Lea Tribune

AUSTIN — The Austin Bruins matched the first-place team in the NAHL Central Division shot for shot and hit for hit all night, and their battling finally paid off when they won 1-0 over the Bismarck Bobcats in overtime in Riverside Arena Friday.

Each team had 28 shots in the game and Austin (25-22-4 overall) took the win when Jacob Paganelli got free for a stick-back goal with 1:52 left in the overtime session. Paganelli was in the right place at the right time, and he said it felt good to score the deciding goal.

“It felt awesome,” Paganelli said. “It was a real team effort, I just got a lucky bounce, and it went my way. It could’ve been anyone’s goal out there because we were all working hard.”

Both goalies were walls, and Austin’s Kristofer Carlson stopped all 28 shots he saw to get his fourth shutout of the season. Carlson didn’t have to face any wide open looks, thanks to some solid defense by Austin. 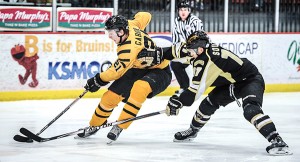 “We showed what kind of team we are,” Carlson said. “That’s a tough team and I’m really proud of everyone putting their hearts on the line. It’s stressful, but I’m used to it and it’s part of the job.”

The Bruins were already in position to make the playoffs, but Austin head coach Kyle Grabowski is hoping a win over Bismarck (31-17-1 overall) will give his young team some confidence in the last nine games of the regular season.

“They’re a very, very good hockey team and they’re in first place for a reason,” Grabowski said of Bismarck. “It was a gutsy win by us and we knew we had to be our best. I think it was one of the best games of the year for us.”