How do blue jays open acorns? What do robins mean when singing? 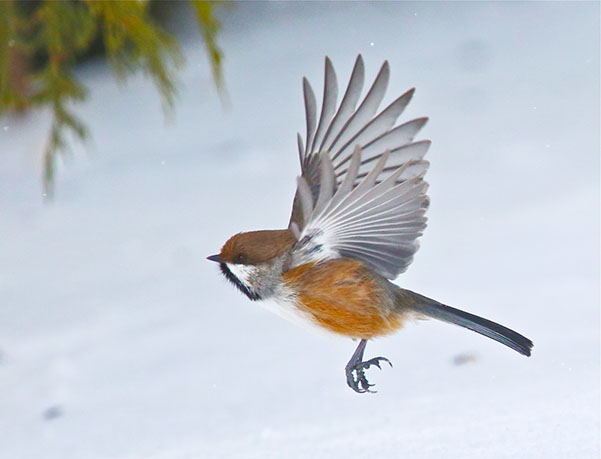 A boreal chickadee in flight by Peter Trueblood of Oakland, California. -Provided

“Everything is nearly copacetic. I made it out of bed, so let’s have breakfast to celebrate my major achievement. It won’t be long before we spring ahead for daylight saving time. What a goofy exercise. Why don’t we take all that daylight we’ve saved over the years and sell it to some folks who need it and lower the national debt? I went to St. Menard’s to get a vise, but was told that they had given them up for Lent. I’ve heard people say, ‘Easter is early this year.’ Other years, folks comment about Easter being late, but I’ve never heard anyone say, ‘Easter is right on time this year.’ I visited Pop. He was taking a nap because gravity runs in my family. So I sat down to wait. I was hungry. There’s always free cheese in a mousetrap, but I happily munched on some peanuts sitting in a bowl on a table. By the time Pop woke up, blinking at the light like a toad in a hailstorm, I’d eaten all the peanuts. I apologized for my gluttony. Pop said, ‘No worries. After I’ve sucked the chocolate off, I don’t care that much for them.’”

I listened to birds making spring sounds. A voice of the land. The language of the seasons.

The avian declarations of spring shined like a good deed in a naughty world. I thought of Bob Dylan’s lyrics, “May your heart always be joyful. May your song always be sung.”

Meanwhile, back
at the Sax-Zim Bog
Winter Birding Festival

I arrived during visiting hours.

A great gray owl can go through 18 inches of snow in pursuit of voles. A ruffed grouse spends most of its time in snow burrows for the warmth and to avoid predators. It favors the buds and twigs of aspen, but also eats rose hips and the fruit of dogwood and mountain ash.

I watched a porcupine feeding on bark high in a tree. These live pincushions, weighing up to 35 pounds, don’t shoot or throw their quills.

The man was eating fish. He was soft on herring and hard of hearing.

“Lots of birders in town,” I said, making an effort at a meal’s small talk.

“Murders? There hasn’t been a murder here since the 1800s, and no one was convicted for that one.”

“No, birders,” I stated. “There is a birding festival in town.”

“A burning festival? What the heck is that?”

A friend, Tom Malone of Dunedin, Florida, offered a better listening story. He was helping a bird bander in California. Tom’s job was to hold a captured bird until the bander was ready to place a band on its leg. Tom was holding a Steller’s jay when he thought it would be interesting to hear the bird’s heartbeat. He held it to his ear. The jay wasn’t amused and bit Tom’s ear in the most painful of ways.

Joyce Tabor of Askov wrote, “How do blue jays open acorns?” Acorns are a favorite food of blue jays and they’re made for eating acorns. A blue jay holds a nut with one foot and uses its beak like a chisel to crack open the acorn.

“What are the meanings of the different songs that robins sing?” According to a good guy named Lang Elliott, an authority on bird vocalizations, robin songs are divided this way. Its true song is a territorial declaration. The dawn song is another territorial declaration. Peek-and-tut calls are heard in alarm situations. A whinny sound is heard in mildly alarming situations. A high-pitched seeeee call is given in response to the presence of an aerial predator. A zeeeup call is a contact note heard mainly during migration.

SOAR with the Eagles

The National Eagle Center’s SOAR with the Eagles Festival takes place in Wabasha where hundreds of bald eagles move north along the river, feeding on fish as the ice recedes. On March 5-6, a flying bird program by The Birdman of Las Vegas will feature an Andean condor, African crowned crane and bateleur eagle. David Stokes offers a program for kids featuring a variety of live animals on March 5-6 and March 12-13. On March 12–13, the World Bird Sanctuary from St. Louis provides a flying bird program. Other presentations are on whooping cranes, exotic and native insects from the University of Minnesota and the National Eagle Center’s live eagles. On March 19-20 hawks, owls, falcons and vultures will fly over the heads of visitors thanks to Wings to Soar. On March 26 StarLab, a mobile planetarium, will explore the wonders of the night sky. A daily admission includes all scheduled programs and festival venues. A schedule is at www.nationaleaglecenter.org/soar-with-the-eagles/.

If you’re interested in monarch butterflies and pollinators, come to a meeting at 6:30 p.m. March 22 at Southwest Middle School’s Little Theater.

“I have never been a millionaire, but I have enjoyed a great meal, a crackling fire, a glorious sunset, a walk with a friend, a hug from a child, a cup of soup, a kiss behind the ear. There are plenty of life’s tiny delights for all of us.” — Jack Anthony

“Happiness is when what you think, what you say and what you do are in harmony.” — Mohandas Gandhi