LaVerne “Vern” C. Olson, 88, of Clarks Grove passed away Wednesday, March 9, 2016, at Good Samaritan Society of Albert Lea in his loving wife’s arms and surrounded by her two caring nephews and niece and their spouses. He was loved by all. He is now rejoicing in the presence of his Lord and Savior.

Funeral services will be at 2 p.m. Saturday at Center Evangelical Lutheran Church in rural Leland, Iowa.The Rev. Thomas Rank will officiate. Visitation will be from 4 to 7 p.m. Friday at Bonnerup Funeral Service in Albert Lea, and one hour prior to the service at the church. Interment will be in the church cemetery following the services. Military honors will be accorded by the Albert Lea area veterans groups. 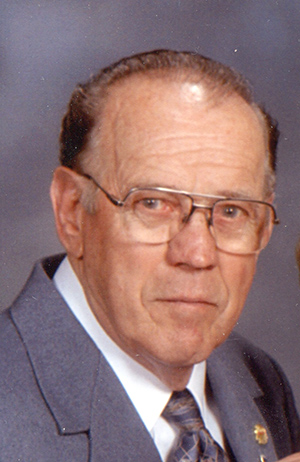 Vern was born Jan. 5, 1928, in Winnebago County, Iowa, the son of Clarence and Gena (Langfald) Olson. He was baptized and confirmed and a lifetime member of Center Evangelical Lutheran Church. Even though he moved around the country in he and his wife’s employment he never broke his connection with his beloved church. He attended country school and graduated from Lake Mills High School.

He and several of his buddies enlisted into the army. He received an honorable, medical discharge. Shortly thereafter he met his love, his wife, Clarice Trostheim. They were married Oct. 8, 1950, at Little Brown Church in Nashua, Iowa. Together they were blessed with one child, their son whom they lost as an infant, their little angel.

Although he endured much medically since a young man, in his old age he never complained, never lost his humor or showing his love to others, especially his wife. He had a strong faith in God.