A memorial service for Mabel S. Johnson will be at 11 a.m. Thursday at First Lutheran Church in Albert Lea. The Revs. John Holt and Kent Otterman will officiate. Visitation will take place one hour prior to the service. Interment will be at Lakewood Cemetery. 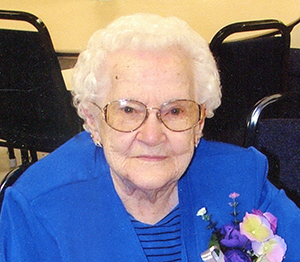 Mabel S. (Honstad) was born on Jan. 5, 1915, to Lars and Mary (Ranes) Honstad in Rake, Iowa. She attended and graduated from Rake High School in 1933. On Jan. 5, 1942, she was united in marriage to Reiner J. Johnson in Lake Crystal. To this union, three children were born.  Mabel was an active member at First Lutheran Church in Albert Lea. She was also a proud member of the Degree of Honor.

Mabel worked in the materials management department for Naeve Hospital in Albert Lea from 1959 to 1987. She also was a clerk at the grocery store in Rake and worked as a clerk at Woolworths in Albert Lea for a few years. Aside from work, Mabel enjoyed to embroider and entertain family and friends. She enjoyed sharing stories and conversation with friends and family over a hot cup of coffee. She frequently traveled to Texas with her golden girls. Most importantly, she loved her family above all else. She cherished every moment she had with her entire family.

Per Mabel’s wishes, memorials are preferred to Peace and Power.

Mabel’s family would like to extend a special thank you to the staff at Good Samaritan for their exceptional and wonderful care.