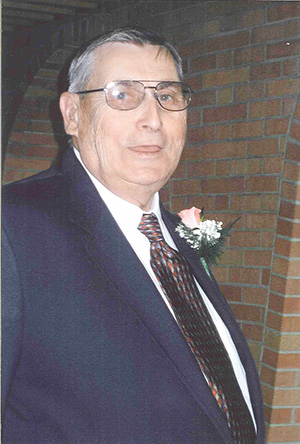 surrounded by his family.

Richard Carlyle Guckeen was born Feb 12, 1938, in Austin to Lawrence and Margaret (Mayer) Guckeen. He attended school in Austin and graduated from Austin High School in 1955. On June 4, 1982, Dick married Julie Munson at Crane Chapel in Austin.

Dick loved being around people, especially when it involved helping others. Model railroading was a passion of his. Since retiring he kept busy golfing, bowling at Echo Lanes and playing cards at the Mower County Senior Center. He enjoyed his morning breakfasts with the crew at McDonald’s and was a regular at Kenny’s Oak Grill. Those were times he didn’t like to miss. He truly loved volunteering at Austin Medical Center, working at the front desk, escorting patients, gathering wheelchairs, greeting and helping those entering the clinic. He greeted everyone with a smile.

Dick touched the lives of many in Austin, but always felt as if he was the one who was touched.

He was preceded in death by his parents and grandparents.

Friends and family may visit from 4 to 7 p.m. Friday at Mayer Funeral Home, 600 Second St. NW in Austin ,and after the service at the luncheon. The celebration of Dick’s life will be at noon Saturday at Our Savior’s Lutheran Church, 1600 W. Oakland Ave. in Austin. The Rev. Karen Behling will officiate. Celebration arrangements are entrusted to Mayer Funeral Home. The family prefers memorials.