When do swallows arrive in Minn.? What do robins eat beside worms? 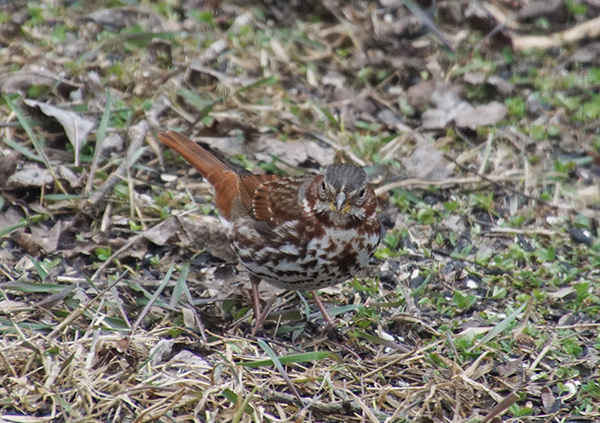 “Everything is nearly copacetic. I had breakfast with my friend the toaster. I see Fuel’s Paradise raised its prices again. That place is crooking with gas. I’m having one of those days where I’m one part right, two parts wrong. I counteract that by doing a whole lot of nothing. That will change. I plan on doing some marathons this year.”

“Don’t be silly. I’m going to binge-watch a bunch of TV shows. I get all the exercise I need by walking down to get the mail. It’s only about a block, but it’s uphill both ways. Knock, knock.”

“Who’s there?” I reply, thanks to a lifetime of training.

“Not Herb. My great-uncle Herb died. Rather than give his children names, he assigned them numbers each day that represented how much he loved them relative to their siblings at that particular time. Number games are fun for kids. He was the youngest of Grandma’s brothers, not much older than Pop who is older than dirt.”

“Yes, he should never have donated that second kidney.”

I watched fox sparrows forage for food by scratching in the leaves. They are chunky sparrows with a lovely, fox-red coloration.

Mourning doves cooed and chipmunks scurried about. Red-winged blackbirds trilled, “Look at me,” but robins seemed to be everywhere I looked.

There was a smell of rain in the air.

Many people are able to detect that smell. Humans remember scents well. You probably remember how your grandmother’s house smelled.

It thundered and the thunder bullied in some rain.

I experienced petrichor. That’s not a bad thing. Petrichor is the pleasant smell that accompanies a rain and is most noticeable when the precipitation falls on dry ground. The word comes from the Greek petros (stone) and ichor (the ethereal essence that flowed in the veins of the Greek gods). The scent is from the oils given off by vegetation that were absorbed into neighboring surfaces and released into the air after a rain. Falling raindrops send these chemicals airborne where our nostrils can find them.

If the ground becomes soggy, there is an earthy or wormy smell. The air smells as beets taste.

A fox sparrow, a bird that is passing through, sang a beautiful song, giving a fitting voice to the petrichor.

“Do cedar waxwings migrate?” They are short- to long-distance migrants. We see them here in the winter, but many cedar waxwings winter in the southeastern U.S. with some traveling as far south as Costa Rica and Panama.

“I heard someone say that a squirrel was in a black phase. Can that be correct?” I will become a picker of nits for a moment. Is it a phase or a morph? A black phase squirrel is one that presumably will return to its normal gray color. The squirrel would be going through a phase. A black morph squirrel retains its pelage color for life. I guess as long as we understand what is meant, either term works. The black squirrels I see are a melanistic form of the gray squirrel. They are gray squirrels with black fur.

“I enjoyed your story about the saw-whet owl in a recent column. How did this owl get its name?” The northern saw-whet owl was likely named for giving a call that sounds like a saw being sharpened on a whetstone, a stone used for sharpening cutlery or tools by friction. There is no firm consensus as to which of its several calls gave rise to the name, although most experts that I’ve talked to attribute the moniker to the “skiew” call that is made when the tiny owl is alarmed.

“What do robins eat besides worms in the summer?” Worms make up about 15 to 20 percent of a robin’s summer diet. The rest of their diet is made up of insects, berries, fruit and nuts. Robins eat plants 58 percent of the time and animals the other 42 percent according to the book, “American Wildlife and Plants: A Guide to Wildlife Food Habits.” I’ve been told often that robins eat up to 14 feet of earthworms a day.

“Do any birds eat millet?” Yes. White millet is the most common millet found in mixes or bagged alone in bird feeding stores. Juncos, doves and many native sparrow species relish the small seed.

Brad Spooner of Owatonna asked if a pileated woodpecker could down a dead tree. This crow-size bird produces a sound as if it should be a part of an old Tarzan movie. It makes large rectangular holes in dead trees in a search for its favorite food, carpenter ants, and uses its barbed tongue to extract ants from tunnels. Pileateds also eat beetle larvae, berries, nuts and suet. Frequent feeding certainly could hasten a snag’s fall. Most dead trees topple sooner or later.

“I love the man that can smile in trouble, that can gather strength from distress, and grow brave by reflection.” — Thomas Paine

“Birds make any place a chance for discovery and for a bird watcher every walk is filled with anticipation. What feathered jewel might drop out of the sky next?” — David Sibley