Adeline Agnes Lorenz, 92, of Wells died Thursday, April 7, 2016, at Parkview Care Center in Wells. A Mass of Christian burial will be at 10:30 a.m. Monday at St. Casimir Catholic Church in Wells. The Rev. Andrew Vogel will officiate. Visitation will be from 2 to 5 p.m. today at Bruss-Heitner Funeral Home in Wells with a prayer service at 5 p.m. Visitation will continue one hour prior to the service at the church. Interment will be at St. Casimir Catholic Cemetery in Wells. To leave online condolences, please visit www.brussheitner.com 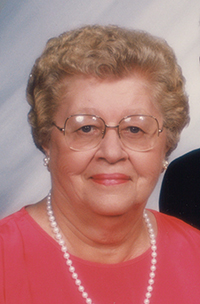 Adeline Agnes was born April 4, 1924, in Wells, the daughter of Paul and Lucie (Sonnek) Stenzel. Prior to marriage, she worked for Mussers and Co. in Wells. Adeline was united in marriage to James Lorenz Aug. 27, 1946, in Minnesota Lake, due to the tornado in Wells that destroyed St. Casimir Catholic Church. She was a lifelong resident of Wells and an active and faithful member of St. Casimir Catholic Church where she was involved with Catholic Church Women. Adeline worked for Schutte Hardware, Wells Builder Supply and retired from Lamperts. Adeline enjoyed country music and played the accordion and piano. She took pleasure in visiting and having coffee with friends. She loved dancing with her husband, James, and spending time with her children and grandchildren.

She is preceded in death by her parents; husband, James; siblings Robert (Evelyn) Stenzel and Florian Stenzel; grandson, Dominic Ceccoli; brothers-in-law Philip, Donald and Theodore; and sisters-in-law Margaret and Evelyn.