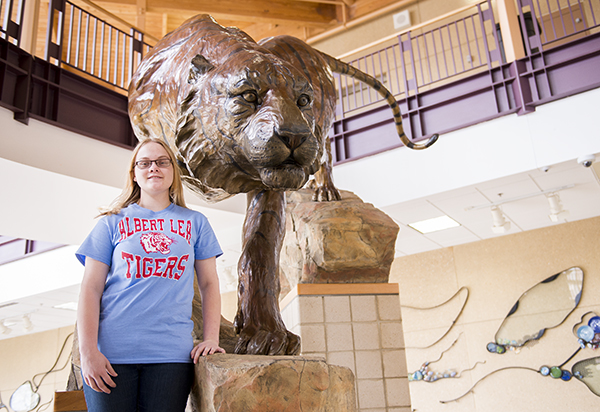 Cassandra “Cassie” Deal Rasmussen is a junior at Albert Lea High School who has grown up with autism. – Colleen Harrison/Albert Lea Tribune

That is the message that echoes from the classrooms of Albert Lea High School during Autism Awareness Month.

“Most of the kids I work with just want to be who they are,” said special education teacher Carrie Troe. “They don’t find autism to be a negative thing or something to be tolerated.”

She’s had many conversations with her students, some of which centered around an autism awareness bulletin board she created in the hall. What she has found is that her students’ perception of their autism varies as greatly as the students themselves.

While some students want to talk about their diagnosis and help others understand how it affects them, others don’t want to discuss it because they don’t feel their autism should define them.

“I don’t know if the kids want anything different than, ‘Just let me be who I am,’” Troe said. “They just want to be who they are without people judging or criticizing them.”

As a teacher, Troe said she never wants her students to feel like she’s trying to change them, because she’s not. There is nothing wrong with them that needs be fixed. What she tries to do in her classroom is help teach them the social and life skills they need to be able to navigate a world that is not always so friendly to those who have social communication challenges.

She has about 20 students who come in and out of her room throughout the day, and each is as different as the next. One of those students is 17-year-old Cassie Deal Rasmussen.

“I sometimes feel like I’m not accepted for who I am, either by peers or by some adults,” Cassie said. 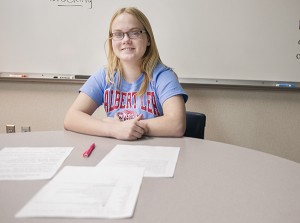 Cassie Deal Rasmussen is involved with Youth for Christ’s The Rock outside of school and plans to go on a trip to Yellowstone National Park with the youth organization this summer. – Colleen Harrison/Albert Lea Tribune

She said she thinks those people have no right to judge her because they don’t know anything about her.

She is one of the students in Troe’s class who is open to speaking with others about her autism and, according to Troe, has become very good at self-advocacy. She’ll spend time before or after school speaking with her teachers or softball coach about issues she struggles with in the classroom.

Some of those issues relate to sounds in the classroom. She has difficulty tuning out background noises and will sometimes ask to go to another room if she feels overwhelmed.

She also has problems with multitasking and does better with step-by-step instructions.

Cassie has an individual education plan that outlines what she needs to be successful as a mainstreamed student — a student who attends regular, general education classes. The document also allows for other accommodations, including using notes in test taking and having extra time to complete tests, quizzes and assignments.

The 17-year-old admitted she has very few social interactions with her peers. She has difficulty reading body language and a person’s tone of voice. Most often, she takes things harder than they should be. She finds adults easier to speak with, as a result, because they tend to understand her more.

She deals with the frustrations that are the result of her autism by listening to music, talking to an adult or cuddling with her therapy cat, Autumn.

After high school, Cassie wants to stay close to her family and attend Riverland Community College. She’s unsure of an exact major but would like to work with kids with autism since she knows so much about it.

Not every student with the diagnosis of autism can speak so openly about their feelings on the subject, though. Jessica Sosebee is an ALHS teacher who works with the nonverbal autism students who attend the school, as well as a couple others who need a lot of structure in their day. A couple of her students attend electives with their peers, but spend the majority of the day in her room.

Sosebee said it’s not just about being aware of those within the autism community, but being accepting of them.

“Autism doesn’t define them,” Sosebee said. “It’s just a part of who they are, so we just have to start accepting that and not look at it as a negative thing, but embracing it.”

She finds it to be quite easy.

“They have really good hearts, and they see things differently than we do, so it puts things into perspective,” she said.

Whether it’s those with autism, or anyone else, Sosebee said, “We need to be more considerate I think, and not pick out the differences that other people have.”