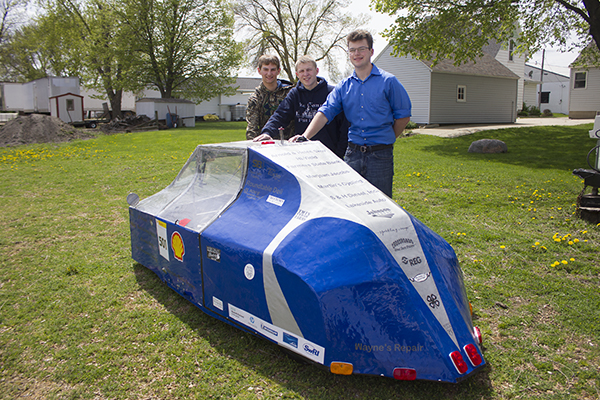 The Alden-Conger School supermileage team will perform in a world competition in late June.

The team will travel to London from June 27 to July 3 to compete in the first annual Shell Eco-Marathon Europe.

A GoFundMe account has been set up to help pay the team’s travel expenses. Adviser Dave Bosma said he hopes $30,000 is raised. for the trip. Shell is paying for the cost of slightly less than half of the team’s 18 members as well as the cost of the adviser.

The trip comes after the team finished first in April’s Shell Eco-Marathon in Detroit in the Urban Concept division that covered four-wheel, street legal cars, with 525 mpg in a self-made vehicle. The race was 10 laps around a slightly more than half-mile track in downtown Detroit.

The vehicle the team constructed is 57 inches wide and 4 feet high.

The team also finished second in the Prototype Ethanol division.

Head mechanic Jacob Wallin, a senior, said the group has built off of its extensive experience together. Wallin and

The team began work on the vehicle in November and finished work a couple weeks before April’s competition.

Wallin said being on the team for the last six years has allowed him to pick up on technological advancements.

“It has been really eye-opening to see what technology is advancing,” he said, describing the team’s learning process as “trial and error.”

Sorensen said the team has learned from what other teams have done with their vehicles, noting he is looking forward to the experience, particularly coming from a small town to competing on a large stage.

He said despite the team’s success so far, he and his teammates want to win the world competition to solidify their standing.

Bosma said he knew the team would break records years ago when he noticed a lot of the members came from farming backgrounds and had a natural curiosity of how things work. He said the students have been able to pick up on tips from past school supermileage teams.

He hopes the team learns from the best teams at the competition, noting he has been proud of how the team has done so far and hopes they do well in Europe.

Other team members that helped build the vehicle and assist in race-day operations are:

Anyone interested in donating can visit https://www.gofundme.com/2rtejphw. As of this morning, a little more than $1,000 had been raised.