A memorial gathering for Lloyd P. Van Guilder will be from 5 to 7 p.m. Friday at Edgewater Cottage in Albert Lea. Join the family for a time of sharing stories and memories of Lloyd. 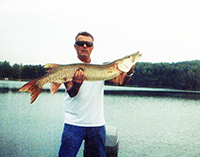 Lloyd Van Guilder passed away Thursday, May 5, 2016, at Good Samaritan Society of Albert Lea. He was 73.

Lloyd Patrick Van Guilder was born July 28, 1942, to Lloyd Sr. and Katherine (Christenson) in Albert Lea. He attended Albert Lea schools. He entered into the United States Navy at an early age and served for two years. On March 5, 1960, he was united in marriage to Diane Wilson.  To this union, three children were born.

Lloyd was employed at Wilson & Co., which later became Farmstead. He later took a job with Ventura Foods, where he retired. Lloyd was a member of the Veterans of Foreign Wars and Pheasants Forever. He enjoyed bass fishing and raising and training homing pigeons in his earlier years. Lloyd also enjoyed tinkering with everything and he could fix anything that was put in front of him.

He is preceded in death by his parents Lloyd Sr. and Katherine; sister, Kay Thompson; and brother, David Van Guilder.