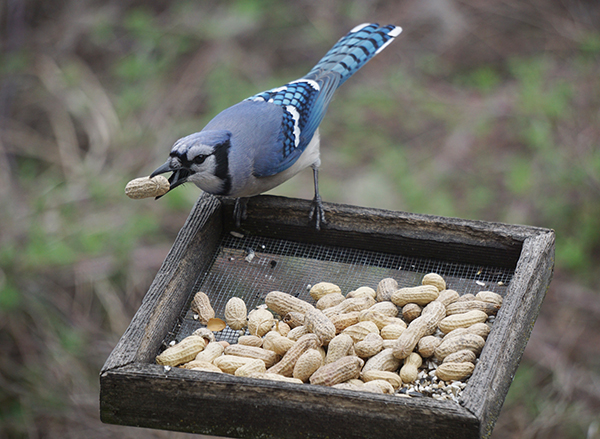 “Everything is nearly copacetic. I’ve got to get Ma a nice Mother’s Day gift. She taught me a lot. I remember jumping on the bed even though she’d told me not to. I fell off and hit my head on the floor. That’s when I learned that Ma gave good advice. Still Bill and Weasel dropped by. Still Bill is so lazy, he bought a tortoise so he could get some exercise while taking it for walks. Weasel just got a dog and a cat. He named the dog Cat and the cat Dog. He was looking for a four-leaf clover and he found poison ivy instead. Weasel won’t pay much attention to mosquito bites this year. They pale in comparison to a poison ivy rash.”

“I imagine that Weasel is taking it in his usual stoic manner, without a single complaint,” I say.

“Yeah, right. Weasel plans to leave his foot in mouth to science. He claims that Job had it easy in comparison. Weasel thinks that of all the people who are likely to get a nasty rash from poison ivy, he’s most likely. He believes that only death can cure a poison ivy rash and that works only sometimes.”

I put out peanuts in the shell for the blue jays and watched one of the jays cache the nuts. It pecked a hole in the ground, dropped a peanut in and covered the hole with dried leaves. Dandelions bloomed. A raccoon ambled in one direction and a groundhog sauntered in another. Stinging nettles shot up from the ground. Red admiral butterfly caterpillars feed on the nettles. I spotted one of the butterflies. I gently petted a bumblebee. There aren’t a lot of things I can say that I’ve done most my life — eat, sleep, breathe and pet bumblebees. I hope the bumblebee doesn’t find it irritating, because I find it pleasing.

The Bluebird Recovery Program hosts a fun and informative Expo somewhere in Minnesota each year. Here are things gleaned from this year’s delightful gathering.

Goat Dispatch is owned by Jake and Amanda Langeslag of Faribault. Goat Dispatch is a company that specializes in land management and brush removal by goats. Grazing goats reduce the production of seeds by consuming seeding stems. Invasive species such as buckthorn don’t sprout when the immature seeds consumed fail to survive a passage through the digestive tract. Goats reduce woody vegetation by consuming the bark, which kills the plant. Goats do well on other invasives such as garlic mustard, dame’s rocket, Canada thistle and sweet clover. Goat Dispatch offers a discount if a red-headed woodpecker nest is found on the property. Contact at goatdispatch.com or 507-333-5959.

Jake had a number of goats die due to brain worm. This tiny parasite lives in the connective tissue around the brain and spinal cord of white-tailed deer. Brain worm eggs hatch and the larvae are expelled in fecal pellets. Some of the larvae are eaten by snails and slugs. Other deer become infected by inadvertently eating the gastropods while foraging. White-tailed deer are natural hosts to this brain worm, so most survive infection with few ill effects. If moose, mule deer, black-tailed deer, elk, caribou, llama, alpaca, goat or sheep are infected, it could lead to death as it did in the case of Jake’s animals.

Keith Radel of Faribault began his bluebird trail with 25 nest boxes. He didn’t fledge a single bluebird the first year. He has since fledged over 100 bluebirds a year for 27 consecutive years. He is the caretaker of 135 locations and fledges 5.41 bluebirds per location. Keith has fledged over 10,000 bluebirds in 30 years. He uses a 1 1/8-inch entrance hole for chickadee boxes and showed a photo of a leucistic black-capped chickadee. Away from the Expo, Carol Bertelson of Albert Lea told me she’d seen a leucistic dark-eyed junco. Leucism is the partial loss of pigmentation in an animal, resulting in white, pale or patchy coloration of skin, hair, fur or feathers.

Brittney Yohannes, a volunteer at the Wildlife Rehabilitation Center in Minnesota, presented a program on red-headed woodpeckers. This lovely woodpecker has suffered a 70 percent decline in population from 1966 to 2010. Breeding Bird Surveys show a drop of 2.5 percent annually. Alexander Wilson wrote in the early 1800s, “There is perhaps no bird in North America more universally known than this. Almost every child is acquainted with the red-headed woodpecker.” They catch flying insects by winging from a perch. These flycatching woodpeckers nest in tree cavities. There is a 45-day nesting period, with eggs (usually five) typically laid in May with young fledging in June. Wildlife trees can be unsightly, but snag trees and dead parts of live trees are vital to red-headed woodpecker recovery. Dead trees are full of life.

Karla Bloem, Director of the International Owl Center in Houston, Minnesota, said that 60 to 80 percent of the great horned owls in her area show evidence of rodenticide in their bodies. This comes from eating poisoned prey.

Jeanie Mortenson of Faribault received the Dick Peterson Award, a lifetime achievement award for outstanding dedication and devotion to bluebirds, and Loren Murphy of Faribault earned the Bluebirder of the Year award. BBRP members have fledged 364,801 bluebirds over the last 36 years.

“Forgiveness does not change the past, but it does enlarge the future.” — Paul Boese

“But let us not condemn the species unheard. They exist, they must therefore be necessary.” — Alexander Wilson