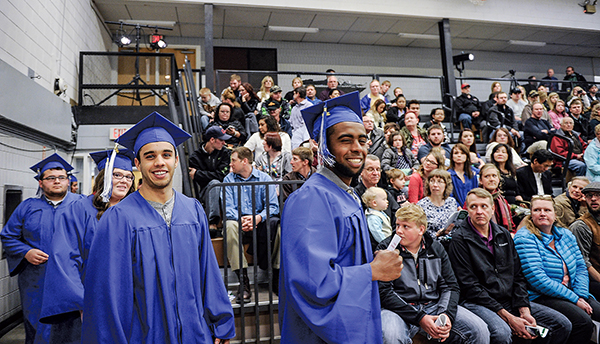 AUSTIN — More than 500 students are moving on to the next chapter. 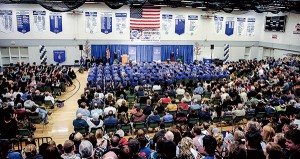 Graduates include students from the fall, spring and summer semesters. Students attended the Albert Lea, Austin and Owatonna campuses and enrolled in Riverland’s online courses.

Of those initial 117 students to graduate was Nicole Donoso. Originally from Columbia, Donoso immigrated to the United States in 2013 and later graduated from Pacelli High School.

An honor student graduating with an Associate of Arts degree, Donoso spoke on the merits of being different and embracing diversity, as well as recognizing and celebrating the difference in others.

“Being different, being diverse is not dangerous,” Donoso said. “I’m different. I know it and I’m proud of it.” 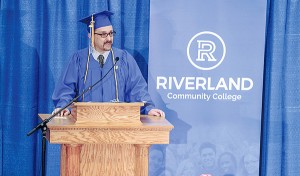 It was because of these attributes that Donoso said she was driven to succeed.

“It also inspired me to pursue my educational dreams,” she said.

Like so many before her, Donoso credited family and friends for helping her get this far, but she also praised the environment at Riverland for steering her down the course she has taken.

“Also, because of this place, here, it’s who I am now,” she said. “A place where everybody is welcome.”

But the moment wasn’t just for Donoso to tell her story. She served as a reminder to the other graduates.

“I’m taking this opportunity to tell you, remind you how important you are because you are unique,” she said.

Peterson is taking his second run at post-secondary education, continuing a path that ended abruptly a number of years ago. Having hit upon difficult times, Peterson stopped going to school and ended up flunking out of his first run at college.

But Peterson, who also received an Associate of Arts degree through online education while working full time, decided the time had come to turn the tables.

“Within a few years I have turned failure into success,” he said.

Peterson, in his 40s, reflected on his time still in school and the time ahead as he heads to the University of Minnesota-Crookston, again taking online courses.

Amy Talamantes of Albert Lea was the student speaker at the 7 p.m. ceremony.

Graduates of the career programs will be ready to enter immediately into the workforce. Students with associate degrees may choose to continue their education at a four-year college or university, or begin their career.

• 554 students are graduating from Riverland’s fall, spring and summer semesters

• Approximately 227 are participating in the two commencement ceremonies

• Students graduating range from age 17 to 76, with about 34 percent of the graduates age 22 or younger and 66 percent are over 22

• Of those graduating, 498 students (90 percent) have taken at least one course online

• Some students — about 62 percent — received an associate (AA, AS, AFA or AAS) degree, while others have earned degrees, certificates and diplomas from various Riverland career programs — 38 percent