While male birds are busy singing, what are the females doing? 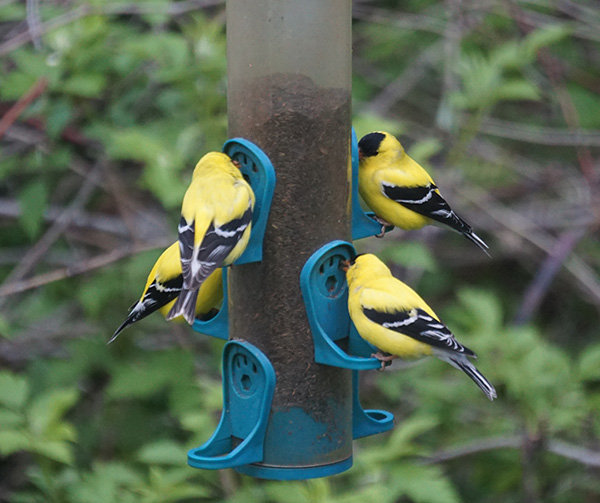 Birds of a feather flock to the feeder together. – Al Batt/Albert Lea Tribune

“Everything is nearly copacetic. I feel like I could do anything today, but I can’t remember what it was that I’m supposed to do. Still Bill thinks he can cook. He’s much better at eating than cooking. He favors peppered dishes that keep a flame burning in my stomach for a week. I don’t like spicy foods. A meal shouldn’t hurt. Still Bill believes that if something is worth doing, someone has already done it. That’s why I was surprised to learn that he’d started an exercise program. He’d grabbed a 5-pound potato bag in each hand and extended his arms straight out from his sides and held them there as long as he could. Each day, he found that he could hold that position just a bit longer. After a couple of weeks, he moved up to 10-pound potato bags. A few more weeks and he’d advanced to 50-pound potato bags and eventually, he could lift a 100-pound potato bag in each hand and hold his arms straight out for more than a full minute.”

“It sure is. Still Bill is getting so strong that he’s planning on putting a potato in each bag.”

On the road to nature

I was driving along looking at muskrat mounds.

Then all smell broke loose! Someone’s car had hit a skunk.

A few miles down the road, when I could safely breathe again, I began looking at muskrat homes once more. I wasn’t considering buying one. I was checking out the pairs of Canada geese on the mounds. There were many. The geese find the structures built by muskrats to be perfect for nesting. I wonder if the muskrats ever tell the geese to get off their roofs? They probably do, but it does no good. There is a language barrier.

“What ratio should I use for hummingbird nectar?” Use a ratio of 4:1 — four parts water to one part white granulated sugar. No red color required. Pour the sugar into hot water. This formula works for oriole feeding, too.

“While the male birds are busily singing their morning chorus, what are the females doing?” Listening.

“I found a robin’s egg on the ground. What happened?” Ah, CSI Eggville. Major predators of robin eggs are blue jays, crows, snakes and squirrels. Squirrels seldom drop eggs. Snakes swallow the eggs at the nest. The robin parents could have chased the thief, causing it to drop its purloined prize.

House wrens puncture and/or remove the eggs of other species. Chipmunks will dine on bird fruit. Deer, cats, skunks and raccoons eat bird eggs, but primarily from ground nests. The parents could have dumped an infertile egg, but I don’t know how frequently that happens.

The Minnesota Department of Natural Resources’ Nongame Wildlife Program includes the EagleCam and the FalconCam, as well as research and restoration projects on common loons, timber rattlesnakes, trumpeter swans and more than 800 other species. You may donate anytime — 80 percent of its budget comes from donations.

This award-winning app is free and turns your digital device into a field guide. The app includes 821 species; a gallery of over 3,200 images for comparison; field mark call outs; seasonal and migratory range maps; a Find Birds with eBird feature powered by the Cornell Lab of Ornithology; and a social community of birders who observe, identify and share observations and photos. It includes in-depth descriptions with information on appearance, habitat, behavior and the sounds of birds.

“The wildlife and the habitat cannot speak for itself. So we must, and we will.” — Theodore Roosevelt

“The best way to pay for a lovely moment is to enjoy it.” — Richard Bach