Al Batt: How do you tell the difference between male and female pelicans? 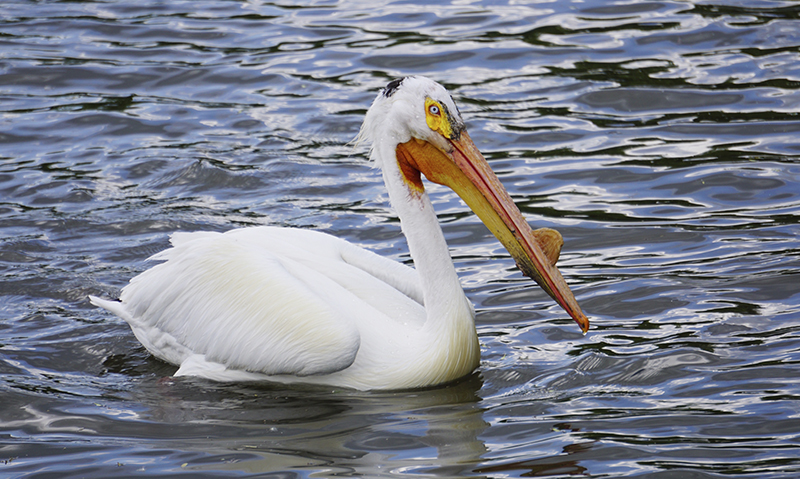 “Everything is nearly copacetic. There are days when I feel like an ear of sweet corn at a raccoon convention, but then there are good days like this one when I’m dressed in a sweatshirt and sweatpants. I’m a human napkin. If someone goes to bed early, he’s doing something healthy, but if I sleep late, I’m lazy. Does that make any sense? It’s unfair. My lawn has already crushed my spirit. The only lawn equipment I enjoy using is a lawn chair. The buckthorn, dandelion, ragweed and burdock crops look good this year. I feel lucky to be alive today. And so should all the other people who attended our annual family picnic. Next year, I won’t be asked to bring the potato salad. Pop tells me how lucky I am because he grew up without air conditioning. I don’t think wind had even been invented yet when he was a boy. I’ve had big pockets put in all my clothes. They have to be big to hold all the rocks I need to keep from blowing away. That’s why plus sizes proliferate here. They are survivors. The skinny people have all been blown to California.”

My wife asked me politely to shut up and listen. She had been rocking to the crazy tunes, listening to the morning download of live birdsongs in our yard. What she wanted me to hear was the sound of a cuckoo. Yellow-billed cuckoos are known as a rain crow by some as their calls are thought to be predictions of rain. They have a primal-sounding, croaking call often given in response to loud noises such as thunder. The call is a slow, hollow-sounding “ka-ka-ka-ka-ka-kow-kow-kowlp-kowlp-kowlp-kowlp.”

I noticed something and you may have, too. There were small masses of frothy spit, usually at a leaf node, on various plants. These white foam structures are produced by the nymphs of spittlebugs (also called froghoppers), which are tiny insects related to aphids and other true bugs. The meadow spittlebug is a common species in the Midwest.

On the road, a young red-tailed hawk and a turkey vulture took turns feeding on a road-killed raccoon.

A Baltimore oriole fought his image in the window of our house as a gray catbird watched from a nearby perch. Was the catbird an enabler? A cheerleader. Likely just curious.

Baby starlings, a dull, grayish brown in color, make noises that seem to be without end. A mother fox squirrel brought three babies to forage under a bird feeder. The youngsters sampled everything (even trying to eat pieces of dried bark), chased their own tails, fought, cavorted and were frightened by a chipmunk.

Nature provides multitudes of mysteries and endless entertainment free for the looking.

Bruce Ness of Albert Lea asked how to tell male pelicans from female pelicans. Both male and female American white pelicans develop a flattened protuberance on the upper bill, like a horn, during breeding season, which is shed at the end of breeding. This appendage is called a nuptial tubercle. Male and female birds are similar in appearance and coloration — the males slightly larger than females.

“Do all honeybees sting?” Only female bees sting. Stingers evolved from ovipositors and males don’t have ovipositors. Honey bees have barbed stingers. A barb securely embedded in the skin of the enemy allows the venom gland more time to pump its contents. Honey bees die after they sting. The bee dies because a portion of its internal organs is ripped from its abdomen as it flies away. Some may live hours or even days after. Honey bee stingers don’t always embed. Sometimes, when honey bees sting thin-skinned creatures such as other insects, the stinger doesn’t become hooked and they can sting again. The stinger of the queen isn’t barbed. That means she could sting more than once.

“How do bees make honey?” Bees start the process by sucking nectar from flowers. They store it in their honey stomachs. Back at the hive, they pass it by mouth to other worker bees that chew it until enzymes turn it into honey. The bees store it in honeycomb cells, acting like tiny canning jars made of wax. A beekeeper told me that it takes eight bees all their lives to make a single teaspoonful of honey.

“Here’s to the crazy ones, the misfits, the rebels, the troublemakers, the round pegs in the square holes — the ones who see things differently — they’re not fond of rules. You can quote them, disagree with them, glorify or vilify them, but the only thing you can’t do is ignore them because they change things. They push the human race forward, and while some may see them as the crazy ones, we see genius, because the ones who are crazy enough to think that they can change the world, are the ones who do.” — Steve Jobs

“I once had a sparrow alight upon my shoulder for a moment while I was hoeing in a village garden, and I felt that I was more distinguished by that circumstance than I should have been by any epaulet I could have worn.” — Henry David Thoreau