Al Batt: Researches have evidence of birds spreading fire to force out prey 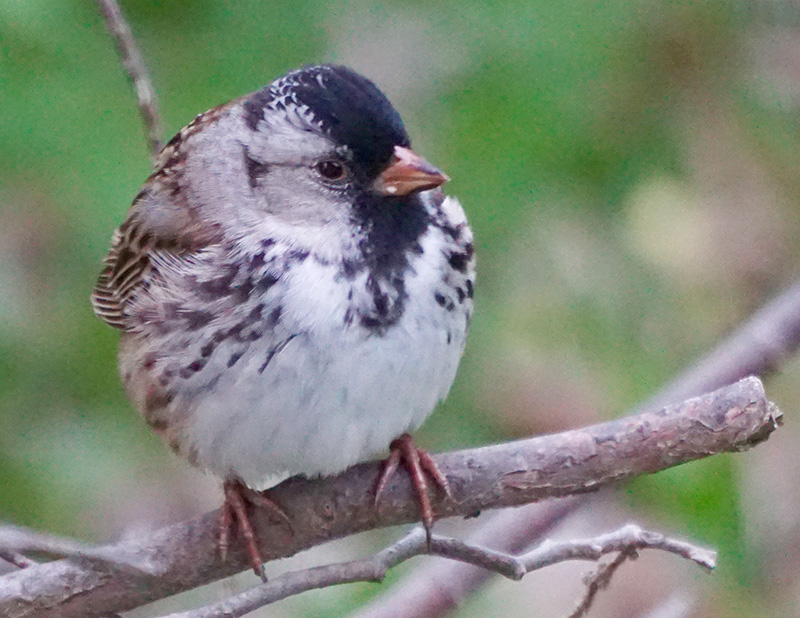 The Harris’s sparrow learns how to sing its song. – Al Batt/Albert Lea Tribune

“Everything is nearly copacetic. I’m still on the right side of the autopsy and striving to rise to my level of incompetence. Some people think of where we live as backcountry. That’s because every farmer has a bad back. I got a good cardio workout this morning. I walked face first into a spider web. Yesterday, my sister Cruella and I watched 8 hours of my favorite TV show back-to-back. Fortunately, I was the one facing the TV. All this means I’m tickety-boo, I reckon. I just came from St. Menard’s Hardware. I have to do some home repairs. The roof let enough rain in that I caught a case of mildew. My hovel is like a casino. The house always wins. I had some machinery breakdowns on the farm. The nice thing about having such old equipment is that I’ve been able to memorize most of the parts numbers. I’ve made a list of all the buckets I own. They are on my bucket list. Well, I’ve got to get. Eleanor Roosevelt said that we should do something every day that scares us.”

“And what are you doing today?” I wonder.

The morning chorus woke me early and summoned me from my bed. Male birds were yelling at other male birds, “Get off my dawn!”

Catbirds gobbled green elderberries. Rose-breasted grosbeaks sang. They are one of few bird species to sing on the nest. The female sings when building the nest, incubating and brooding. The male sings quietly from the nest and loudly from other perches.

Crows gathered together in the middle of the road. Were they velcrows? No, they were chowing down on road kill.

I took a walkabout in New Richland. I looked down at ants scurrying about on the sidewalk. When I’d worked in Arizona recently, a friend told me that The Grand Canyon State was home to 318 species of ants. I recall reading something, I think it was from Carleton, saying that Minnesota has 102 ant species. The trees weren’t the only things holding up the sky. A good number of chimney swifts were flying overhead. The chattering of the flying cigars not only made me look up, it made me feel up.

A Polish proverb says, “When opportunity knocks, some people are out in the backyard looking for four-leaf clovers.”

I don’t think that applies when eating lunch.

Brice, a student in a writing class I taught, found a four-leaf clover on campus while he ate lunch outside.

Researchers have preliminary evidence of Australian birds spreading fires in order to force prey from protected areas. The brown falcon and black kite are believed to pick up smoldering material, and fly it to new locations. The birds regularly hunt at the edges of fires, but such blazes aren’t always positioned over food sources. Moving the fires to areas with a heavy concentration of prey creates an opportunity to hunt frogs, reptiles, insects and mice.

A Purdue University study has found that honeybees collect the vast majority of their pollen from plants other than crops, even in areas dominated by corn and soybeans. The pollen comes from residential lawns, home gardens, parks, golf courses, etc. The pollen is consistently contaminated with a host of pesticides throughout the growing season. The most common chemical products found in pollen were fungicides and herbicides, typical crop disease and weed management products. Of the insecticides, neonicotinoids and pyrethroids were the most common in the pollen and posed the highest risks to bees.

“How long does it take a robin to fledge?” Robin eggs are incubated for about two weeks before hatching and fed in the nest for another two weeks. Young robins jump from nests before they can fly and run on the ground, begging food from parents for an additional two weeks before becoming capable of sustained flight.

Harvey Berg of Waseca said that the cardinals that once nested in his yard are now nesting in his neighbor’s yard. Harvey wondered how he might get the cardinals back. He could sue the neighbor for alienation of affection.

“Could I raise a turkey vulture to keep as a pet?” By law, a person cannot keep one in captivity. The exceptions are zoos and wildlife rehabilitators that hold permits. Turkey vultures are one of my favorites. The Wright Brothers studied the flight of birds–turkey vultures and pigeons mostly. Orville wrote, “Learning the secret of flight from a bird was a good deal like learning the secret of magic from a magician. After you once knew the trick and know what to look for, you see things that you did not notice when you did not know exactly what to look for.” Wilbur studied the turkey vulture’s dihedral flight to learn how to achieve stability in the design of their first successful airplane. A group of vultures is called a venue.

“Are bird songs instinctive or learned?” Some birds like ducks, geese, hawks and herons hatch knowing what sounds to make. The true singers are passerine species called the oscines–orioles, sparrows, thrushes and warblers. They learn to sing, beginning to learn as nestlings listening to adults.

“No work is insignificant. All labor that uplifts humanity has dignity and importance and should be undertaken with painstaking excellence.” — Dr. Martin Luther King Jr.

“The most dangerous worldview is the worldview of those who have not viewed the world.” — Alexander von Humboldt