Memorial services for Marjorie J. Jensen of Albert Lea will be at 1 p.m. Monday at the Bonnerup Funeral Service chapel in Albert Lea.

The Rev. Don Malinsky will officiate. Friends may great the family one hour prior to the service at the funeral home. Interment will be in Graceland Cemetery at a later date. 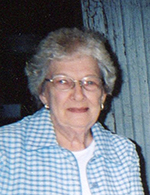 Marjorie was born March 19, 1927, in Albert Lea, the daughter of Nels and Ruby (Tapager) Turtness. She graduated from Albert Lea High School.

On April 13, 1947, she was united in marriage to Albert “Alby” Jensen in Albert Lea. Marjorie had been self-employed along with her husband as owners of Midway Dairy Bar and Sub Café. She also worked for many years for the state of Minnesota at the Albert Lea Visitors Center. She was a member of the Eastern Star and DOES, and in her free time enjoyed collecting and restoring antiques, hair weaving, car upholstery and — most of all — spending time with friends and family.

Marjorie is survived by her children Mike (Andrea) Jensen of Albert Lea and Gwen Adams of Albert Lea; grandchildren Colton Jensen and Callan (Zach Neubauer) Jensen; great-granddaughter, Sophie; and many nieces and nephews.

She was preceded in death by her parents; husband, Alby; two brothers, Robert and Glen Turtness; and special friend, George Ulman.