Family teams up to bring awareness to human trafficking 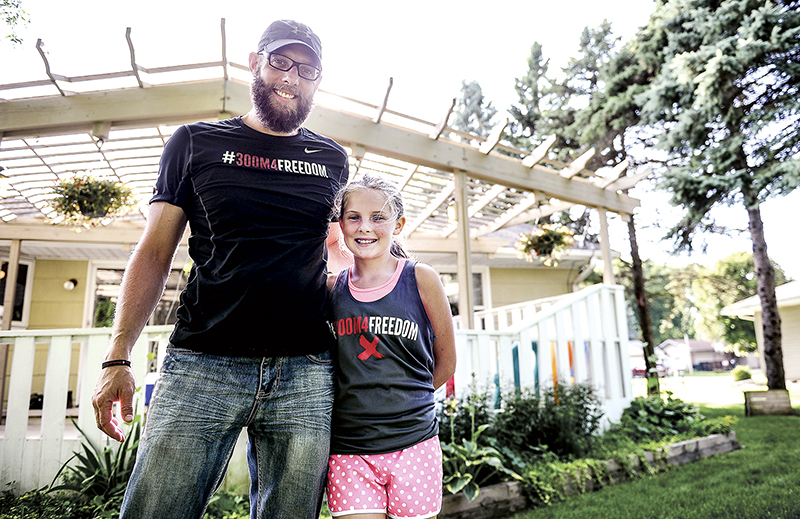 Kelly Nesvold stands with his daughter, 11-year-old Julie, who will run part of the way with Nesvold during his fundraising run. - Eric Johnson/Albert Lea Tribune

AUSTIN — As the days grow closer to one of Kelly Nesvold’s biggest physical challenges of his life, he can relax a little with the thought of him having his family’s support.

Kelly Nesvold will compete in the 300M4FREEDOM, a 300-mile triathlon to bring awareness to fight human trafficking Aug. 26-28.

He will run portions of the race with his wife, Danielle, and now, his 11-year-old daughter, Julie, has volunteered to run a marathon’s worth of distance during the 55-mile running portion of the triathlon.

“One day we were just kind of sitting in the kitchen and my dad asked me if I wanted to do a marathon with him,” Julie Nesvold said. “I asked him how long that was, he said ‘26 miles’ and I said ‘OK.’”

Julie Nesvold picked up running this year at Southgate Elementary School, when her teacher and Austin High School boys’ track and field coach Ryan Timm had the class run a mile every Monday to help them stay active. 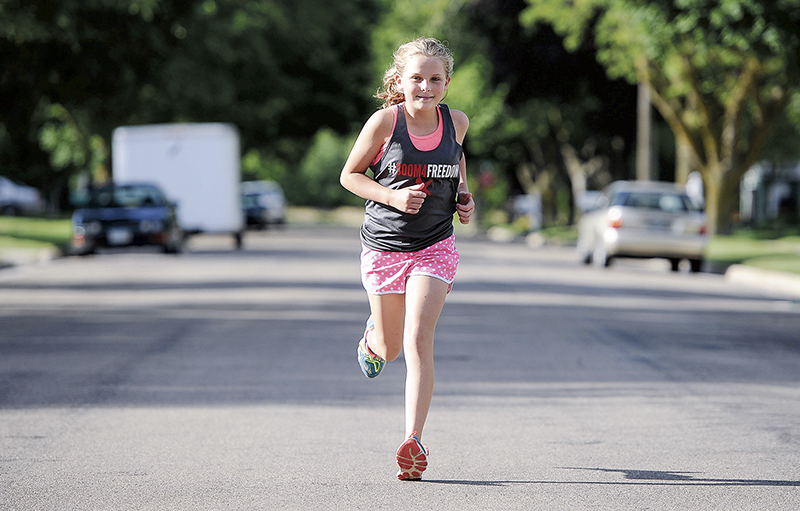 Julie Nesvold, 11, runs down the street past her house Friday night. The daughter of Kelly Nesvold will run with her father during a fundraising triathlon later this summer. – Eric Johnson/Albert Lea Tribune

Soon, Julie Nesvold began running twice around her block at home to run a mile and she’s now run as many as five miles.

Julie Nesvold will run 5-mile stretches and take 5-mile breaks during Kelly Nesvold’s runs and she will run the last three miles as part of a 5k run that goes through Austin at noon Aug. 28. Kelly Nesvold is inviting the public in Austin to run or walk the final 5k and the information on that portion of the event will come out soon.

He said that having Julie Nesvold run with him is going to make the running portion of his triathlon a little easier.

“It’s going to be huge. It’ll help a lot,” Kelly Nesvold said. “My wife will run as much of the 55 miles as she can, and she’s going to be with Julie to help her reach her goal. It’s really neat to see the rest of the family pushing themselves by going above and beyond. That’s going to be the worst part for me, and having them will help me.”

Julie Nesvold, who will attend IJ Holton Intermediate School in the fall, is looking forward to running in the 300M4FREEDOM event with her dad and she’s already starting to think about competing in track and field when she gets the chance.

“Mr. Timm asked me if I wanted to run when I get to Ellis and I told him I would go for it,” she said.