Funeral services for Maureen J. Stiehl of Albert Lea will be at 2:30 p.m. Wednesday at First Lutheran Church in Albert Lea. The Rev. Diane Odermann will officiate. Visitation will be from 5 to 7 p.m. Tuesday at Bonnerup Funeral Service and one hour prior to the service at the church. Interment will be in Hayward Cemetery in Hayward. 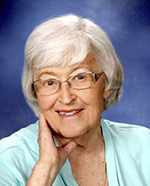 Maureen had been a resident of Albert Lea all of her life and was an active member of First Lutheran Church, singing in the choir and teaching Sunday school for over 10 years. She had been employed by Wilson & Co., was a cashier at Standard Truck Stop for 16 years and cashier at Trumble’s Restaurant for 11 years. Maureen was a member of Hammer School Mothers, Albert Lea Community Theater for 11 years (33 plays) and the American Legion Auxiliary, where she was past president. She loved reading, sewing, roller-skating and bowling, and enjoyed karaoke, traveling, coloring and winters in Texas.

She was preceded in death by her parents Harry and Eva Dahl; husband, Veryl; stepfather, Russell Nelsen; father and mother-in-law Fred and Elsie Stiehl; and aunt and uncle Julius and Harriett Hansen.