A Clarks Grove man is facing prison time after being charged with two felonies. 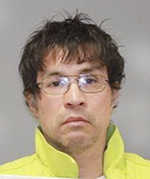 His second appearance on the charges was Thursday.

Court documents state that a Freeborn County Sheriff’s Office deputy was dispatched on the morning of June 23 to a report of a domestic assault in Clarks Grove.

Upon arriving, the alleged victim who lived with Lopez said that Lopez had become angry the night before because she had turned off the television and alleged that he had pushed her down on her bed. After pushing her down three times, Lopez reportedly climbed on top of her, grabbed her neck with both hands and choked her.

She also alleged that Lopez had threatened to kill her, and said she was able to get Lopez to stop choking her.

She alleged that she attempted to call the police and Lopez responded by saying that she “will see what happened” if she called the police.

Court documents state the deputy observed light red marks on both sides of her neck, as well as other injuries to her arms and wrist.

Later that day, Lopez was arrested and transported to Freeborn County jail. Upon arriving, the deputy conducted a Mirandized interview with Lopez, who claimed that the alleged victim had unsuccessfully tried to choke him.

Court documents state Lopez admitted to getting on top of her and claimed he choked her so she would know how it felt. He denied threatening her.

Lopez’s next appearance is scheduled for July 21.